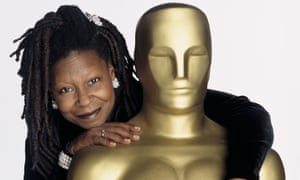 This year’s Oscars are still officially host-free for the second time in their 90-year history, but a rumour has begun to circulate online that four-time host Whoopi Goldberg could emerge as a surprise frontrunner for Sunday night’s show.
Goldberg has been absent from her regular presenting duties on daytime show The View, which airs in the US on ABC, the same network which broadcasts the Academy Awards.
Click here to view her post on twitter
Goldberg was the first woman to act as solo host of the Oscars, in 1994, and went on to repeat the role in 1996, 1999 and 2002. All four outings were well received by critics and audiences, with highlights including a Moulin Rouge-style entrance on a swing and a turn dressed as the tudor Queen the year Cate Blanchett’s Elizabeth was toast of the town.
Earlier this week, Vanity Fair, which has close associations with the Academy Awards, posted a clip of Goldberg’s 1999 effort on Twitter.

Before the Academy first approached Goldberg to host, she had already made Oscars history as the first African American woman to land two nominations. After losing in 1986, for The Color Purple, Goldberg won best supporting actress in 1991 for Ghost.

Kevin Hart was appointed to host the 2019 ceremony in December, but stepped down three days later in the wake of upset about homophobic comments he had made in the past. Before and after his departure, Goldberg expressed interest in taking on a gig which few have been willing to consider.
Speaking on The View as it emerged the Academy was considering relying on a rolling roster of presenters rather than a single emcee, Goldberg said: “If you want to go hostless, that’s your prerogative. I think it’s a dumb idea. People need someone to take them through things. I think it needs to be somebody who loves the films.”

She went on to play down her own chances of being that somebody. “I realise I may not be anybody’s first choice,” she said. “I’m also problematic!” More recently, she said she hoped the band Queen would open the show – which they have been confirmed to do.
However, others have been less sceptical about the illness which has been used as the reason for Goldberg’s absence from The View, flagging her frequent coughing and the fact that her co-host Abby Huntsman is pregnant.
Goldberg was among those who defended the actor Liam Neeson, after he admitted in an interview that he had wandered the streets for a week 40 years ago, looking for a “black bastard” to kill after a black man raped a female friend.
“People walk around sometimes with rage, that’s what happens,” Goldberg said. “Is he a bigot? No. I’ve known him a pretty long time, I think I would have recognised … I’ve been around a lot of real bigots. I can say this man is not one.”
She added: “You can’t be surprised that somebody whose loved one is attacked is angry and wants to go out and attack. What he did go on to say ... is that he realised that it was too dark for him, he went and got himself help.”

By Solomon Isa at February 20, 2019
Email ThisBlogThis!Share to TwitterShare to FacebookShare to Pinterest