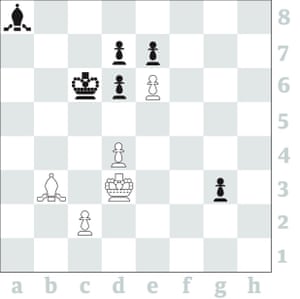 It was back to business as usual for Magnus Carlsen in last weekend’s world blitz championship at St Petersburg. Norway’s world No 1, 28, had earlier made a dreadful start of two losses in the 15-minute rapid championship, and his subsequent recovery
fell half a point short of the young Russian Daniil Dubov.

But in the 21-round blitz, defined as three minutes per player for the entire game plus a two seconds per move increment, Carlsen was pushing from the start. Admittedly he rode his luck on occasions, and in the very first round his opponent could have trivially drawn a bishop and pawns ending by non-committal moves but instead exchanged off into a lost pawn ending.
The pivotal moment came on the first day in rounds seven and eight when Carlsen outclassed first Jan-Krzysztof Duda, the 20-year-old Polish No 1 who will soon be among the elite, and then Alireza Firouzja, 15. The Iranian talent, who finished an impressive sixth in the rapid and was named in last week’s column as a player to watch in the blitz, began brilliantly with victories over several eminent opponents and reached 6.5/7, ahead of Carlsen and others on 5.5, The world champion did what he had to do and trounced the teen, who could not recover and finished down the field.
In the final rounds Carlsen was chased all the way by Duda, who finished half a point behind. Hikaru Nakamura, a speed specialist and the only top American to compete, won bronze, as he had done in the rapid.
England’s only representative was Gawain Jones, fresh from his victory in the British knockout championship at Olympia whose format included classical, rapid and blitz. Jones made no show in the rapid and began the blitz with 0/3, but then suddenly took off, scoring 10.5 from the next 12 rounds, zooming up the score table, and meeting Duda in round 16. There the dream ended, as Jones missed a hidden Rc6 resource at move 20, Duda produced a knockout two moves later and the 31-year-old subsided in the final six rounds.
The open rapid and blitz each had medal prizes of $60,000, $ 50,000 and $40,000, much of which came from the Saudis. The event was formally titled the King Salman World Rapid and Blitz Championships, but Riyadh, the controversial 2017 host, would not provide visas to Israel or Iran either last year or this.
Hence a bizarre compromise, whereby the 2017 name continued, five Saudi competitors rated far below the nominal 2500 minimum were included at St Petersburg, and it was announced that neither alcohol nor pork would be available. The event attracted several thousand spectators every day, a rarity when most chess viewing is now online.
The separate women’s championships had main prizes totalling $90,000, which attracted almost all the world’s top players. China’s Ju Wenjun won the rapid and Russia’s Kateryna Lagno the blitz. They were the form pair as finalists in the classical championship played in November, but the star in St Petersburg was Sara Khadem, 21, who won silver in both rapid and blitz. The Iranian could not have competed if the event had been in Riyadh.
The main championships were technically open but women entrants were absent, no surprise considering the large rewards available in the all-women events. It could have been different if the all-time Nos 1 and 2, Hungary’s Judit Polgar and China’s Hou Yifan, had been available.
Polgar, 42 and retired from competitive chess, played virtually only against men throughout her career while Hou, now concentrating on her Rhodes Scholarship MSc degree at Oxford, prefers male opponents.
Carlsen enjoyed his win in round 13, the first on the second day of blitz, against his old nemesis Anish Giri. There has long been needle between them, mostly conducted on Twitter, since Wijk aan Zee 2011 when the Dutchman won as Black in only 22 moves, and for years could boast of his plus score against the champion. Carlsen could not equalise the totals until Bilbao 2016 and then had another bad experience at Wijk 2017, where he failed to find an obvious way to mate in three or win Giri’s queen.
So after their blitz game, in which Giri fell into his opponent’s prep and flagged with mate imminent, Carlsen told Norwegian television: “There are many who have fantasies as to what is the best way to start the day. This is mine.”
Black can keep the game level by 9…Ba5! while 12…Qd7 13 0-0 Qe6 is still a game. Carlsen erred by 22 c5?! when 22 Bxa7! Rxa7 23 Qd4 forks both rooks. Next turn 23…Qd6? (Bd5!) proved fatal and when Black overstepped 25 Ra8+ Kd7 26 Qa4+ is winning.
By Solomon Isa at January 05, 2019
Email ThisBlogThis!Share to TwitterShare to FacebookShare to Pinterest