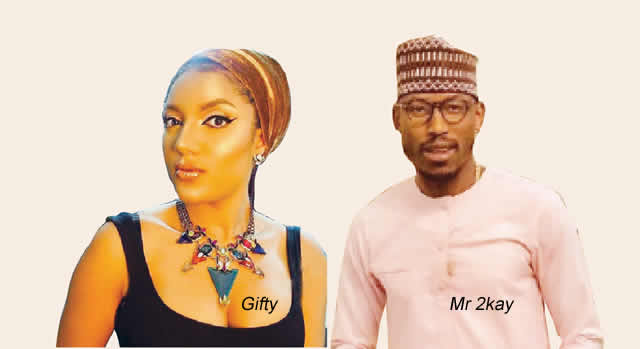 The identity of the father of the child of former Big Brother Naija contestant, Gifty Powers’ child, Alisha, continues to be shrouded in mystery. Recall that Gifty recently posted a
picture of the child with a man on social media. She stated that the guy in the picture was the true father of her child.

However, Mr 2kay responded shortly after that with a post in which he insinuated that a DNA test had been carried out on the child and the results could not be wrong. He wrote, “DNA too true to tell a lie, way forward”.

This was after he had felicitated Alisha on his Instagram page. “Happy birthday to my sunshine. Alisha is one today. Daddy loves you so much. May God keep protecting you and showering his blessings on you endlessly. My little princess and you look so much like your big brother,” he wrote.

In an exclusive chat with Sunday Scoop, “Gifty maintained that 2kay isn’t the father of her child. She said, “Tell him to post the proof (of the DNA test) on his Instagram page. I know what is happening. 2kay just wants a stupid publicity stunt.”

However, Mr 2kay insisted to Sunday Scoopthat he wouldn’t release any proof. He said, “I am not saying anything about this issue again. You can call Gifty and listen to whatever she has to say.” When he was informed that we had spoken with Gifty, he said, “Okay. I’m not discussing anything more about that. I am an adult and nobody can force words out of my mouth.”

To further lay credence to Mr 2kay’s earlier claims to Alisha’s paternity, a source who used to work closely with him stated unequivocally that Mr 2kay was the father of the child. The source said, “Gifty is lying; Mr 2kay is the father of her child. The baby was born on December 17, 2017. I recall that we were in Port Harcourt then when she called to inform him that she had been delivered of the baby. Mr 2kay had been responsible for the upkeep of that child and I was even the one that used to deliver items such as baby food, diapers and clothes to her for the baby. On his last trip to the UK, he still bought some things for her”
By Solomon Isa at December 24, 2018
Email ThisBlogThis!Share to TwitterShare to FacebookShare to Pinterest