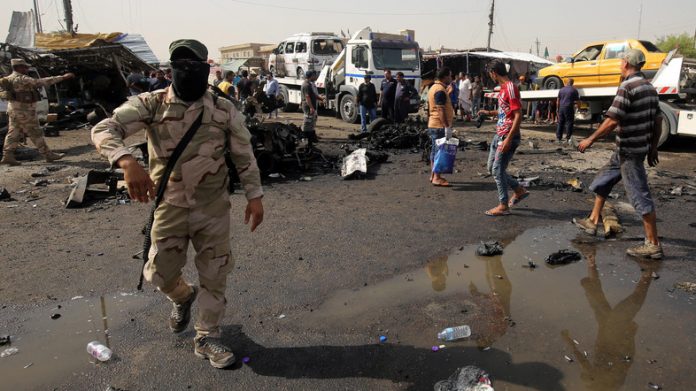 Eight people were killed and injured in a bomb blast north of Baghdad on Tuesday, a security source told Baghdad Today.
“An explosive charge went off near a popular market at al-Tarimiya town north of Baghdad, leaving two persons dead and six others injured,” the source said.
“Security forces rushed to the blast’s site and cordoned it off,” the source said, adding
that ambulances carried the dead to the forensic medicine department, and the injured to a nearby hospital for treatment.

One-hundred and fourteen Iraqi civilians were killed, while 244 others were wounded as result of terrorism, violence and armed conflicts during the month of October, according to a monthly release by the United Nations Assistance Mission for Iraq (UNAMI).
Baghdad was the worst affected Governorate, coming in the first place with 177 civilian casualties (38 killed, 139 injured). Anbar province followed with 36 killed and 55 injured, and then Kirkuk with 18 killed and 33 injured.
The Iraqi capital has seen almost daily bombings and armed attacks against security members, paramilitary troops and civilians since the Iraqi government launched a wide-scale campaign to retake Islamic State-occupied areas in 2016. Though most of the daily bombings go without a claim of responsibility, Islamic State has declared it had been behind many.
By Solomon Isa at December 29, 2018
Email ThisBlogThis!Share to TwitterShare to FacebookShare to Pinterest