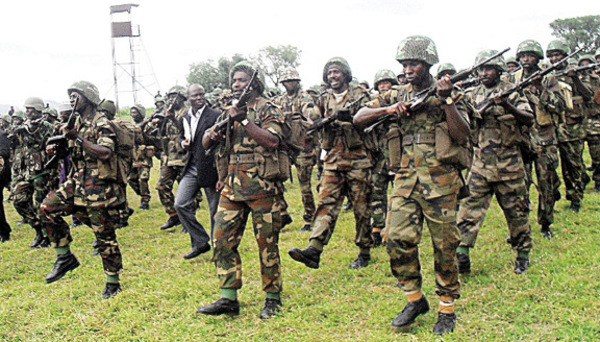 Military Special Task Force (STF) in charge of internal security in Plateau state has paraded additional seven suspects in connection to the recent attacks in Barkin Ladi and Riyom Local Government Areas of the state.

Acting Director, Defense Information from Defense
Headquarters, Abuja, Brigadier General John Agie while parading the suspects at the command headquarters in Jos yesterday, told journalists that “l came in from Abuja today in continuation of our intelligence gathering and intensive investigation over what happened in the state last month.

“Our troops are still after those who are involved in the attacks on the 23rd of June, and that led to the arrest of two suspects.”

He said “among the seven suspects are; Ibrahim Choji and Ahmadu Ibrahim. These two suspects were part of those who attacked Zongo village on 23rd of June.

“We also have three other suspects here one Shuaibu Suleman, Buhari Shuaibu, Zakamin Abdulkadri, these ones were part of the suspects that attacked Josho village of Bokkos on the 14th of July.

“After this parade, we are going to hand them over to the police for further investigation and prosecution.

“Meanwhile, our intelligence is working round the clock in the villages to fish out these attackers, and as soon as we get them, we will let the public know, and they will be treated according to the law.

“We had paraded 11 suspects before now, and here we are parading another seven suspects, and all of them are in connection to the attacks. So we have 18 suspects so far.”

Ahmadu Ibrahim, however denied ever participating in the said attacks. He claimed he was arrested on his way from a cattle market in Bukuru.