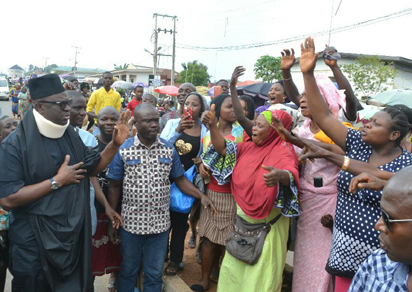 Ekiti State Governor Chief Ayodele Fayose being hailed by the market women on his way to the Ewi’s Palace after the just concluded Governorship Election in Ado Ekiti today.
Governor of Ekiti, Ayodele Fayose on Tuesday made his first public appearance in Ado Ekiti, state capital after
the July 14 poll which produced All Progressive Congress (APC)’s Kayode Fayemi, as governor-elect.

He was hailed by a huge crowd of market women, kids, aged and youths on the street of Ado Ekiti as he walked from the Oja Bisi area of the state capital to the palace of the monarch of Ado Ekiti, the Ewi of Ado, Oba Rufus Adejugbe.

The crowd who showed excitement on seeing him, prayed for him and wished him well in his future endeavours.

They saw him off to the Ewi palace where he reported the security lockdown in the state, particularly as it affects ts him at the government office to the monarch, urging the Ewi and other traditional rulers in the state to intervene.

He still wore the neck guide which he had shortly after he alleged he was physically assaulted by security agents on July 11.

Reporting to the Ewi, Fayose said: “l have come to let you know that before the July 14 election, the government house was invaded by the police and men of the Department of State Services (DSS) and the poll was rigged, over 300 of our members and top government functionaries have been arrested and clamped into detention since then. My wife was also subjected to a 45 minutes harrowing experience while entering the government house shortly before the poll.

“Since the day of the poll, the government office has been shut and my security agents have been withdrawn.

The July 14 poll has come and gone, and the constitution says up until Oct 16, I am still the governor. Since they have left this morning, I felt I should inform you, Ekiti people , Nigerians and international community that l am still being locked at the government office.

I urge you to help tell the Federal Government and security agents and others that I should be left alone, l and my family have a right to life.

The man who contested against us is being protected, but my policemen have been withdrawn. I represent Ekiti and was given a mandate of the people.

Harassing me is not the best.”

“My aides are being hareassed, searched, their vehicles up to spare tires and they are being searched even to their pants. I wonder why we should be in this kind of situation ahead of 2019. I want you to intervene please Kabiyesi, ” he said.

Responding, the Ewi of Ado, who was almost moved to tears as he watched governor Fayose, said: “First of all I want to thank God for sparing your life and tjat up till now, there has not been casualties.

Before the poll and as if we knew this was going to happen, the council of Obas met with INEC officials security operatives, party candidates and others and pleaded with all parties that before, during and after the poll, we want peace in Ekiti state, because we are homogenous, Ekiti will remain one forever and whoever wins we will accept.

” It is unfortunate that this kind of thing is happening, the way I see you today in complete black, which is against our custom in the palace. I knew something is happening. I will convey your message to the chairman traditional council of Obas in Ekiti. We had discussed you this morning and wondered where you are.

We use this opportunity too to appeal to the security operatives to, in the name of God restore your security to you. Whatever it is, we are in Ekiti and they should allow us to intervene in this matter, all the three of you in the race, yourself, Professor Olusola Elena, and Dr. Kayode Fayemi are our sons. You are all our eminent sons that cannot be wished away. We urge all parties to allow peace to reign. We will also get in touch with Dr. Fayemi to use his good office to intervene, ” the monarch assured.
By Solomon Isa at July 19, 2018
Email ThisBlogThis!Share to TwitterShare to FacebookShare to Pinterest