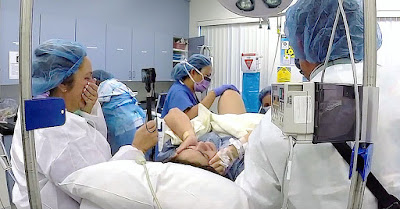 Three years after Weston and Erica had their first daughter, the California family was elated to find out they were having twins — one boy and one girl.

Four years later, something rather incredible happened. Something that doesn’t happen very
often.

Erica was pregnant again… with twins. That’s right — for the second time in less than five years, a second set of twins was on the horizon! Only this time, the couple didn’t want to know the sex of the twins until they were delivered.

In November 2014, Weston and Erica headed off to the hospital for induced labor. Doctors had to break
Erica’s water because she was full-term at 38 weeks.

Like a proud husband and father, Weston decided to document the big day: from the drive to the hospital to the magical moment the babies were delivered. He popped open the car trunk to reveal a slew of electronics to capture the memories, like computers, an iPad, and a camera fitted with a GoPro. The result is a heartwarming and personal video that takes viewers along on this crazy ride.

The labor was very quick — only three hours from water breakage to newborns.

But my favorite moment is when the nurses break into a chorus of cheers after revealing the twins’ genders to Erica. Absolutely beautiful.