June 17, 2018
Nigeria’s World Cup hopes ran into traffic yesterday as Croatia overwhelmed the Super Eagles and ran away with a 2-0 win in their group D opener at the Kaliningrad Stadium. 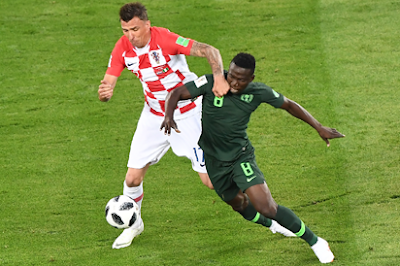 
The Super Eagles went into the game with high
hopes, but it was the Croats that showed more grit winning the battle in the midfield and putting the Eagles on the back-foot. Disaster struck in the 32 minute when a diving header from Mario Mandzukic took a deflection off Oghenkaro Etebo for the first goal.

In the 69th minute Croatia got their insurance goal as defender, William Troost Ekong bundled down Mandzukic in the box and influential midfielder, Luka Modric stepped up and took young goalkeeper, Francis Uzoho the wrong way to sealed up the game.

The Eagles are now rock bottom in the group D standings as Croatia top the log with three points. Argentina and Iceland having played a 1-1 draw are tied on points. The Eagles have a chance to redeem themselves on Friday when they take on Iceland, while Argentina face Croatia.