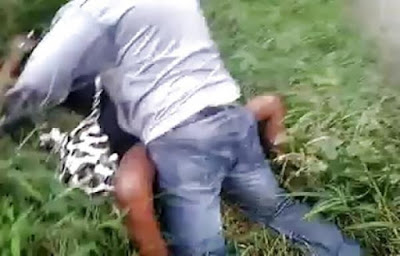 A tailor and resident of New Market, near Gwari Market in Chanchaga Local Government, of Niger State, has confessed how he lured and r*ped a small primary school girl with just N100.
A 32-year-old rape suspect, Ayuba Salihu, on Thursday
told the Niger State Child Right Protection Agency how he lured and raped an eight-year-old pupil with N100.

Salihu, a tailor and resident of New Market, near Gwari Market in Chanchaga Local Government, admitted he had carnal knowledge of the minor.
“I saw her in front of my shop crying that she misplaced N100 out of the money she sold from pure water and I gave her the N100. The following time I saw her hawking, I called her to buy water but the devil lured me into the act.
“I am sorry to have engaged in such an act with a little girl, I promise never to repeat such act again, please forgive me,” Salihu pleaded with the agency.
In her narration, the victim’s grandmother told the agency that the victim was sent to buy N50 pepper in the morning of Aug. 26, but did not return home till 9 p.m.
“I became worried when she did not return home early. I called my stepson and we both went round looking for her because we thought she had been kidnapped.
“It was during the search that we saw her walking to the house at night. I asked where she had been and she did not respond until my stepson started beating her that she told us where she was.
“She confessed that a man, who is a tailor in the market, has been having s*xual intercourse with her anytime she passes the area.”
According to the grandmother, the girls said the man lure her to a corner and r*ped her.
The grandmother said that she reported the matter to officials of Drug and Crime is Haram who arrested the suspect and brought him to the agency.
Narrating her ordeal, the victim said that the suspect lured her into his shop while hawking pure water and forcefully dragged her to a deserted area and raped her.
“He called me that he wanted to buy pure water, after buying the water, he held my hand and told me that we should go and flirt.
“I told him no, but he forcefully dragged me to a lonely area and brought out his male organ and penetrate me.
“He has had carnal knowledge of me five times and after the act, sometimes he would give me N10, N50, and N100 and warned me not to tell anyone or else, he would deal with me,” the girl said.
The Director-General of the agency, Mrs. Mairam Kolo, said that the suspect would be handed over to the police for further investigation.
Kolo who decried the rate at which children were being s*xually abused at a tender age, noted that the agency would embark on vigorous awareness campaign against allowing children to hawk.
According to her, street begging and hawking expose children to all forms of social vices and advised parents to desist from the act.