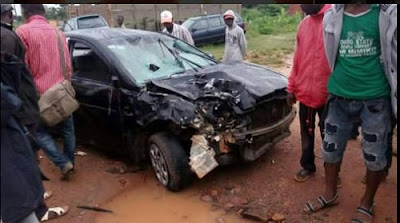 According to PM News, the driver of the first vehicle they tried to stop on high speed, maneuvered, hit the victims and escaped. Three of the robbers died instantly, one was severally injured and taken to a hospital while others sustained different degree of injuries.
Some of the residents said that the victims were secret cult members who needed money and decided to block the road to extort money from motorists.
Corpses have been recovered by the police and deposited at the mortuary for autopsy report while the injured one was admitted in an undisclosed hospital for treatment.
By sir inkris at July 16, 2017
Email ThisBlogThis!Share to TwitterShare to FacebookShare to Pinterest