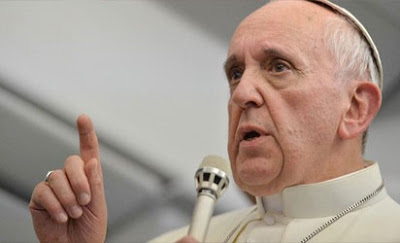 Days after time ran out for the priests of Ahiara diocese, in Nigeria’s Imo state, to write and apologise for having refused to accept Bishop Peter Ebere Okpaleke, their bishop for the past five years, Pope Francis, through some of his closest advisers, has begun to respond to each of them.
“The pope promised he would write back, and
he’s doing so,” said Cardinal John Onaiyekan of Abuja, Nigeria.
The prelate, who’s been the apostolic administrator of the Diocese of Ahiara, also said that the letters “are not passing through me,” so he doesn’t know their content, and added that he probably won’t until the process of delivering the letters is over.
Speaking to Crux over the phone on Friday, Onaiyekan also said that he hopes Okpaleke, who was appointed to the southern Nigerian diocese of Ahiara by Benedict XVI in 2012, is accepted by the time the process is over.
“I hope that my brothers will recognize him,” he said. “I’m waiting and praying, hoping that this long crisis will come to an end.”
The letters from the Vatican, which address each priest by name, are slowly beginning to arrive, through the Vatican embassy in Nigeria- technically called a nunciature. The new papal representative, Italian Archbishop Antonio Guido Filipazzi, arrived in Nigeria a few days ago.
Several attempts made by Crux to reach the nunciature to confirm if the letters that have already been delivered had been brought into the country by Filipazzi went unanswered.
The situation in Ahiara is a complex one, with some members of both the priesthood and the laity refusing to accept Okpaleke, and many others supporting him. The diocese has produced many vocations to the priesthood, and locals argue that it’s time one of them is appointed as bishop.

When appointing the current bishop, who hasn’t been allowed in Ahiara for the past five years, the Vatican followed a long-standing tradition of choosing people from another city to lead any given diocese, particularly in Africa. Historically, this is done in an attempt to show that the universality of the Church overcomes tribal and ethnic differences.

On June 8, Pope Francis issued a seemingly unprecedented threat, giving the priests of the diocese a 30-day deadline: Either write to him promising “total obedience,” or face suspension. The request had already been made by Cardinal Fernando Filoni, of the Vatican’s Congregation for the Evangelization of Peoples, which oversees missionary territories. His request was sent in a letter dated June 24, 2014.

However, the two requests garnered different responses, fueled perhaps by the threat of suspension hanging over the priests who refused to comply.

When Francis announced that he expected them to write a letter apologising for their behaviour and promising loyalty to the pontiff, including in the matter of episcopal appointments, the priests who were rebelling originally responded saying that the request was false.
The papal text in English was originally posted June 9 on the blog of Archbishop Ignatius Kaigama of Jos, president of the Nigerian bishops’ conference. Soon after, the Vatican released the text too, crushing any doubts over its authenticity.

In his strong message, Francis minced no words: “Whoever was opposed to Bishop Okpaleke taking possession of the Diocese wants to destroy the Church. This is forbidden.”
From that day on, most of the priests in the diocese complied with the pope’s request: They sent a letter to the Vatican, addressed to Francis, apologizing. However, based on conversations in recent days with some of the priests, not all of the apologies were honest, as they carried a threat.

“On the directive of the Pope that we should write him individually and personally to express our obedience and loyalty to him and ask for forgiveness for the contribution in the sorrows he has suffered because of the crisis in Ahiara Diocese, all the priests in the diocese have complied,” one of the men put it, on the condition of remaining anonymous. “He is our father, our loyalty to him cannot be compromised in any way.”

Yet, not long after, he added: “But we hope he reviews his position, and appoints a different bishop.”
Though a majority of the people in Ahiara want to see the crisis resolved peacefully, and are praying for each other in this troubled time and have accepted that it’s in their best interest to embrace what Francis asks of them, both sides – those who support Okpaleke and those who want another bishop – don’t hesitate in making ad hominem attacks.

Most of it cannot be re-printed, but one person claimed that the priests who reject the prelate have “inhaled the smoke of Satan.” On the other side, most accuse the bishop and those who support him – from Francis to the laity – of wrong doing and criminal activity.

The priests who, to this point, have received the letters from the Vatican, have refused to share their content, arguing that they are private. However, Crux has received confirmation from Nigeria that the letters address the priests by name, and at least one of them is “quite personal,” and was signed mid-July.
Signed by both the Vatican’s Secretary of State Italian Cardinal Pietro Parolin and Filoni, an “apostolic blessing” is extended on behalf of Pope Francis.

The Mbaise Catholic Forum speculates that the content of each of the letters expected might vary, depending on what each priest wrote in their apology letter. Some, they write, could “receive letters suspending their priestly faculties.”

The pro-Okpaleke website, created by people based in Ahiara, has a list of 201 priests incardinated in the diocese, of whom 157 have allegedly written to Francis. The first number, however, differs from the one given in the 2017 edition of the Annuario Pontificio, the Vatican book of statistics, that says there are 114 secular priests in the diocese, and 14 belonging to religious orders.
By sir inkris at July 24, 2017
Email ThisBlogThis!Share to TwitterShare to FacebookShare to Pinterest