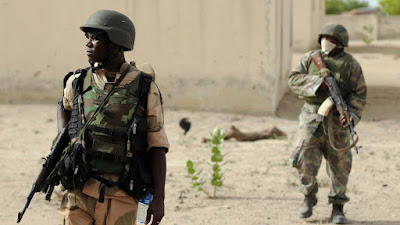 Military authorities have evacuated the body of the soldier killed last Thursday during a shootout between
unknown gunmen and soldiers at Ogbobagbene community, a border town between Delta and Bayelsa States.

A bystander was also reportedly killed by stray bullets during the encounter while several others were injured. The corpse of the soldier The Guardian gathered yesterday was recovered from the Bomadi General Hospital, Delta State, where it was deposited by unknown persons.

Despite the condemnation of the soldier’s killing by Ijaw leaders, youths bodies and individuals in the two states, troops have been deployed to Ogbobagbene and adjoining communities allegedly in search of the gunmen who killed the soldier and carted away a multipurpose machine gun MPG and other weapons.
The Guardian learnt yesterday morning that Ijaw communities along Bomadi and Ogriagbene creeks in Bomadi and Burutu local councils were reportedly being invaded by soldiers from the land and creeks.
The Ijaw Youth Council (IYC) President,. Mr. Eric Omare, and Mr. Alaowei Cleric, an Ijaw human rights activist, alleged that soldiers have killed several innocent people in the ongoing reprisal invasions.
Cleric said: “Following the killing of a soldier by unknown gunmen in Ogbobagbene town in Burutu LGA, residents are currently under the mercy of the rampaging soldiers, as constant harassment, torture are ongoing, and several vehicles and properties are vandalized and damaged.
Residents of Bomadi, Tuomo, Oboro, Okpokunou, Ogbobagbene, Ogriagbene, Akugbene, Esama, Enekorogha, are fleeing.”
Similarly, the IYC alleged that since the unfortunate murder of the soldier, communities along the Forcados River including Tamigbe, Toru-Ndoro, Bulu-Ndoro, Ogbugbagebne, Ojobo, Torugbene, Letugbene and other communities have been under heavy military siege with movement highly restricted and economic activities paralysed.

It was also learnt that soldiers equally invaded Toru-Ndoro Community in Bayelsa State, where they arrested some leaders. The Ijaw Youth Council urged the military to exercise restraint in its bid to bring to justice those who attacked and murdered the soldier.
While condemning the gruesome murder of a soldier by unknown gunmen, the IYC president said the invasion, sporadic shooting and arrest of community leaders and innocent members of the Delta and Bayelsa boundary communities along the Forcados River was not the solution to the security challenge.
They called for utmost restraint in their actions and adhere strictly to the rules of engagement.
By sir inkris at July 17, 2017
Email ThisBlogThis!Share to TwitterShare to FacebookShare to Pinterest