Greed Is The Cause Of Problems Facing Nigeria – Osinbajo 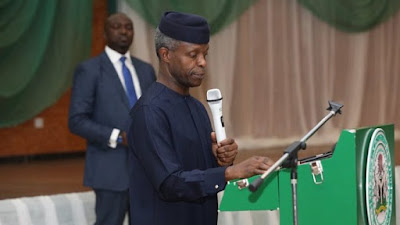 Acting President, Prof. Yemi Osinbajo, yesterday, stated that greed by those placed in leadership positions who looted the nation’s treasury was the root cause of the problems facing Nigeria. Prof. Osinbajo, who stated this in his remarks at the 2017 Fathers Day celebration at Aso Rock Chapel, Abuja, also advised church leaders and ministers of God to always uphold the spirit of integrity and reject any money not got in
a genuine way.

Osinbajo admonished church leaders to teach more about integrity, honesty and thanksgiving, stressing that when ill-gotten wealth was rejected in the church, it would make those with the habit of stealing what belongs to others have a re-think.

He said: “Every time that we come to church, we are told about giving. But we need to talk more about honesty; we need to talk far more about honesty. In the same way we talk about giving, we need to talk more about honesty because just like His Eminence said, Nigeria’s great problem is not the absence of prosperity. ‘’It is as he so eloquently put it, that we have enough for our needs but we don’t have enough for our greed. The greed of many is what has landed this country where it is today. ‘’It is the greed of so many; many who have been placed in position of authority. It is their greed that has landed us where we are, where it is difficult to do the sorts of things His Eminence saw in Washington and so many other places.

‘’You cannot steal half of the resources of the country and expect to build the sort of things you see in other places. Many would say the reason they steal is they want to have an arsenal for future political exploits.It is a lie. It is greed.” In any case, even if you want to do that, you have no right to do it. And if the church says you are not allowed to steal, we will ostracize you in our midst if you did. ‘’If what a man has does not measure up to what he has, if we found that a man has more money than he should have, if a man is earning a salary of a civil servant or a public servant and he has houses everywhere, we have to hold him to account.
But he must be held to account in the church.

“Just as Christian fathers today, it is our duty as God spoke concerning Abraham in Genesis 18:19, it is our duty to build up a generation of righteous men and women, a nation of just men and women who fear God and puts God above everything else.’’ Supporting his admonition with the Biblical quotations, the Acting President said: “ In Genesis 18:19. God was speaking about Abraham. And God said he had known him or called him in order that he may command his children and his household after him that they keep the way of the Lord with righteousness and justice that the Lord may bring to Abraham what He had spoken to him.

“In other words, God was saying that He called Abraham, in particular, because he realizes that Abraham will command his household, will command his children to do righteousness and justice and to fear God. “When I listened to His Eminence, the Prelate of the Methodist Church a few minutes ago talking about the importance of the type of training that he received as a child in his family.

I’m sure many of us here are reminded of that type of training. “A type of training where you are taught and reminded about integrity, primarily as the first order of business; that you must be a person of integrity. You must be truthful, you must be trustworthy, you must be honest, you must be forthright. That is the foundation.’’ Fielding question from State House correspondents on his advice to men involved in domestic violence, he said, “For us, the Scripture says that we must love our wives as ourselves and also goes on to say that any one who does not love his wife certainly does not love himself. ‘’Anyone who indulges in any form of domestic violence obviously needs some teaching and some discipline.’’ Also speaking, speaker of the House of Representatives, Yakubu Dogara, warned against the collapse of family system in the country, urging the government to invest more in family.
While speaking with journalists after the church service, Dogara said: “We should invest more, really as a nation, in fatherhood or in family. And when children are properly brought up, you will see that most of the resources we channel towards control of crime and so many other government programmes, there will be no need for them. ‘’Because we will have some kinds of transformation that only takes place at the family level.

Certain thing cannot be done by the government, like we cannot just outsource discipline in a home, the issue of imparting or instilling morality in the life of our citizens.

Government certainly cannot do that; it is the role of the family.’’ Earlier in his sermon, titled: “Fathers to the Rescue of Our Beloved Nation,” the Prelate of Methodist Church of Nigeria, His Eminence Dr Samuel Kalu Uche, stated that God established the family as a basic and foundation unit of a country. He said: “God has made fathers as the head and this assignment must be exercised in love, honesty, gentleness and unity. The responsibility of a father makes him to be accountable to God. A father must render a selfless service and he must be faithful to his wife.”