According to a police report, Det W/O Wayne Masterton from Malvern SAPS House Break-in Unit was in the process of responding to a business robbery in the area, when he was flagged down by a community member. 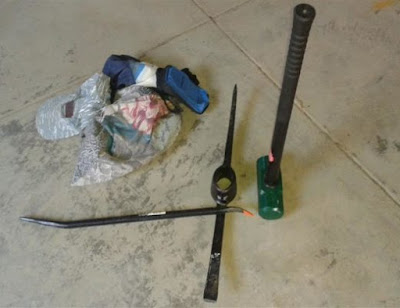 Five suspects were apprehended after they
were found in possession of house break-in implements in the Malvern area, last Friday.
Communications officer of Malvern SAPS, W/O Radhika Marimuthu said, “The community member stated that they were on the lookout for a suspicious white Toyota Corolla with a NJ registration which was seen in their area with five males.”

W/O Masterton then proceeded to the business robbery keeping this information in mind. “En route to the scene of the business robbery, the member spotted the same white Toyota Corolla with the five men in it. The member gave chase and stopped the vehicle, after having called for backup. The officer then singlehandedly ordered the five men out of the vehicle and ordered them to lie down,” she said.

“W/O Masterton found house break-in implements which included a crowbar, a pick, a sledge hammer, screwdriver and gloves among others. The suspects and the vehicle were taken to the station and it was determined that the suspects, all with previous convictions, ages ranging from twenty five to thirty, were charged and will appear in court on Monday morning,” added W/O Marimuthu.

Investigations and linking of the suspects to other crimes are continuing. The acting station commander of Malvern SAPS, Cpt SN Khambula commended the member on his swift action, taking charge of the situation despite him being alone, and placing his life on the line.
By Solomon Isa at June 20, 2017
Email ThisBlogThis!Share to TwitterShare to FacebookShare to Pinterest