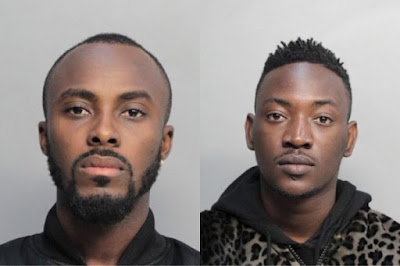 Nigerian singer, Oyindamola Johnson Emmanuel, popularly known as Dammy Krane, had seven cloned credit cards in his pocket, when he was arrested at Opa-locka Executive Airport in Miami Dade, Florida
on 1 June, the U.S authorities say.

The police have now slammed a nine count felony charge at Miami Dade’s criminal court for credit card forgery and grand theft against the “My Dear” crooner, the New Miami Times reports.

Krane was arrested in April for reportedly using a card to book a private jet flight to Washington, D.C.

Agents from the mobile-phone booking app TapJets had called police, when they found that the first card Dammy Krane tendered was bogus. The jet company told Miami-Dade Police that Krane and a partner, Chukwuebuka Ilochonwu, had booked a $10,943 trip on a jet from Opa-locka to Washington, D.C.

Krane lists a permanent U.S. address in Baltimore on the police report, according to the report by Miami New Times.

Two MDPD officers staked out the jet runway until Krane and Ilochonwu showed up. Police searched the pair and found seven cards in Krane’s pants pocket. When authorities checked the cards later, all seven had numbers on the face that didn’t match the numbers on the security strip on the back.

The police says Krane used one of those cards to book his flight and then gave TapJet two other fake cards when he was asked for backup cards for the travel.

The 25-year-old, who is currently on bail, claimed he is innocent, while blaming his agent for the arrest.

His co-defendant, Ilochonwu, police soon learned, was out on bond on four other credit card fraud charges. He was arrested in April on felony charges.