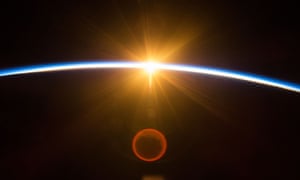 Scientists say the planet could be covered with a solar shield for as little as $10bn a year. Photograph: ISS/Nasa


US scientists are set to send aerosol injections 20km up into the earth’s stratosphere in the world’s biggest solar geoengineering programme to date, to study the potential of a future tech-fix for global warming.
The $20m (£16m) Harvard University project will launch within weeks and aims to establish whether the technology can safely simulate the atmospheric cooling effects of a volcanic eruption, if a last ditch bid to halt climate change is one day needed.
Scientists hope to complete two small-scale dispersals of first water and then calcium
carbonate particles by 2022. Future tests could involve seeding the sky with aluminium oxide – or even diamonds.

“This is not the first or the only university study,” said Gernot Wagner, the project’s co-founder, “but it is most certainly the largest, and the most comprehensive.”
Janos Pasztor, Ban Ki-moon’s assistant climate chief at the UN who now leads a geoengineering governance initiative, said that the Harvard scientists would only disperse minimal amounts of compounds in their tests, under strict university controls.
“The real issue here is something much more challenging,” he said “What does moving experimentation from the lab into the atmosphere mean for the overall path towards eventual deployment?”
Geoengineering advocates stress that any attempt at a solar tech fix is years away and should be viewed as a compliment to – not a substitute for – aggressive emissions reductions action.
But the Harvard team, in a promotional video for the project, suggest a redirection of one percent of current climate mitigation funds to geoengineering research, and argue that the planet could be covered with a solar shield for as little as $10bn a year.
Some senior UN climate scientists view such developments with alarm, fearing a cash drain from proven mitigation technologies such as wind and solar energy, to ones carrying the potential for unintended disasters.
Kevin Trenberth, a lead author for the UN’s intergovernmental panel on climate change, said that despair at sluggish climate action, and the rise of Donald Trump were feeding the current tech trend.
“But solar geoengineering is not the answer,” he said. “Cutting incoming solar radiation affects the weather and hydrological cycle. It promotes drought. It destabilizes things and could cause wars. The side effects are many and our models are just not good enough to predict the outcomes”
Natural alterations to the earth’s radiation balance can be short-lasting, but terrifying. A 1991 Mount Pinatubo eruption lowered global temperatures by 0.5C, while the Mount Tambora eruption in 1815 triggered Europe’s ‘year without a summer’, bringing crop failure, famine and disease.
A Met Office study in 2013 said that the dispersal of fine particles in the stratosphere could precipitate a calamitous drought across North Africa.
Frank Keutsch, the Harvard atmospheric sciences professor leading the experiment, said that the deployment of a solar geoengineering system was “a terrifying prospect” that he hoped would never have to be considered. “At the same time, we should never choose ignorance over knowledge in a situation like this,” he said.
“If you put heat into the stratosphere, it may change how much water gets transported from the troposphere to the stratosphere, and the question is how much are you [creating] a domino effect with all kinds of consequences? What we can do to quantify this is to start with lab studies and try to understand the relevant properties of these aerosols.”
Stratospheric controlled perturbation experiments (SCoPEX) are seen as “critical” to this process and the first is planned to spray water molecules into the stratosphere to create a 1km long and 100m wide icy plume, which can be studied by a manoeuvrable flight balloon.
If lab tests are positive, the experiment would then be replicated with a limestone compound which the researchers believe will neither absorb solar or terrestrial radiation, nor deplete the ozone layer.
Bill Gates and other foundations are substantially funding the project, and aerospace companies are thought to be taking a business interest in the technology’s potential.
The programmme’s launch will follow a major conference involving more than 100 scientists, which begins in Washington DC today.
Solar geoengineering’s journey from the fringes of climate science to its mainstream will be sealed at a prestigious Gordon research conference in July, featuring senior figures from the National Oceanic and Atmospheric Administration (NOAA) and Oxford University.
Pasztor says that most scientific observers now see the window to a 1.5C warmed world as “practically gone” and notes that atmospheric carbon dioxide concentrations will continue rising for many decades after the planet has reached a ‘net zero emissions’ point planned for mid-late century.
But critics of solar radiation management approach this as a call to redouble mitigation efforts and guard against the elevation of a questionable Plan B.
“It is appropriate that we spend money on solar geoengineering research,” said Kevin Anderson, the deputy director of the Tyndall Centre for Climate Change Research. “But we also have to aim for 2C with climate mitigation and act as though geoengineering doesn’t work, because it probably won’t.”

By Solomon Isa at March 24, 2017
Email ThisBlogThis!Share to TwitterShare to FacebookShare to Pinterest