March 26, 2017
John Lewin canvases from about 1800 pre-date his still-life of fish hanging in Adelaide gallery 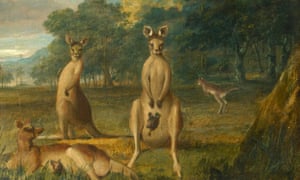 A pair of Australian oil paintings believed to be the first in the country have been discovered at the Royal College of Surgeons in London.
The two canvases, showing groups of amiable kangaroos sitting in a leafy landscape, were unearthed by an academic in the collection of the Hunterian Museum at the RCS.
They are believed to have been painted between 1800, when the artist John Lewin reached Australia, and 1807, when they were presented to the surgeon John Hunter’s collection in
London by his brother in law Sir Everard Home.

That makes them at least six years older than another painting by Lewin that was believed the oldest created in Australia. The still-life of fish with a background view of Sydney Harbour, now in the Art Gallery of South Australia, was painted in 1813.
Sue Roff, a social scientist born in Australia and now living in Scotland, has been researching early views of Australia, and is particularly interested in how the artists grappled with landscapes and animals they had never seen before, such as kangaroos.
“Lewin was an artist trained in anatomy, with a background in natural history painting, and yet to me the kangaroos are highly anthropomorphised, almost Disney versions, sitting there looking soppily out of the picture. It’s the same with the landscape: it’s almost as if the early artists just could not find a way to convey what they were actually seeing.”
“To me the kangaroos look like Mr and Mrs Moneybags in their country park – they’re just wrong.” 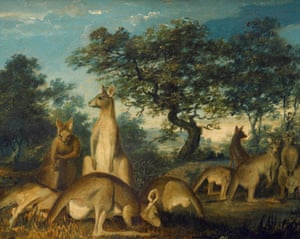 Although Lewin’s kangaroos are not as old as the most famous marsupial painting, “The Kongouro from New Holland”, their historic importance is that they were actually painted in Australia. The Kongouro, which created a sensation when it was exhibited by the renowned horse painter George Stubbs in 1772, was painted in London.
There was an acquisitions battle between the National Gallery of Australia and the Maritime Museum in Greenwich when it came on the market in 2013. It was painted by Stubbs using a vague description and a pencil sketch from a member of Captain Cook’s crew, and a kangaroo skin that art experts believe he either had stuffed or blown up like a balloon to try to get some idea of the appearance in life of the weird animal.
Roff says the Hunterian kangaroos are the earliest known paintings of kangaroos made from live subjects. They were made to appeal to European buyers, and Home almost certainly acquired them in London. When Roff discovered the kangaroos, she first assumed they must be watercolours, and only when a colleague searched the museum’s online catalogue further did she discover they were oil paintings and realise their significance.
Hunter died in 1793, but the Hunterian Museum at the RSC, which will close this spring for three years for a major redevelopment of the building, preserves part of his huge collection of human and animal specimens, images and curios.
Home may have had a guilty conscience: himself a noted surgeon, who published widely on human and animal anatomy, he was suspected of plagiarising Hunter’s research, and destroying some of his records to conceal it. Lewin died in Australia in 1819, and is buried in Botany Bay.