Senior Pastor of Omega Fire Ministries, Apostle Johnson Suleiman may have gotten himself into hot water as he has been accused by one Stephanie
Otobo of impregnating and abandoning her.


In a letter dated March 04, 2017 from her lawyers, Festus Keyamo Chambers addressed to the Inspector General of Police, Otobo said she began a romantic relationship with Suleiman in Canada in 2015.

She said the relationship progressed quickly as the pastor informed her that he was divorced from his wife.   The letter said, Suleiman proposed to her and later took drinks and gifts to her family for introduction, signifying his intent to marry her.


Otobo further​ told the IGP that she abandoned her lucrative career, her cars, friends and house in Canada because Suleiman promised to buy her a house in Nigeria. In another letter dated March 03, 2017, written to Suleiman and attached to the one addressed to the IGP, her lawyers alleged that Suleiman was so in love with Stephanie that he had to lick her body from head to toe each time he wanted to make love to her.


It added that Suleiman invited Stephanie from Canada to Europe, where he usually slept with her all night after Church programmes. At a time, Ms. Otobo was said to be the one sending topic of messages for the pastor to preach and the songs to be sung.  

While demanding the sum of N500m in damages for the breach of trust to marry Stephanie, it was alleged that at a point she had to send Suleiman her nude pictures every Sunday morning before he could preach on the pulpit.

It accused Suleiman of using various devices to intimidate and harass Ms. Otobo. It said on allegations from the pastor, men of the Nigeria Police Force, Monitoring Unit, Kem Salem House, Obalende, Lagos, arrested Stephanie like a common criminal inside a banking hall. Her lawyers gave Suleiman a seven-day ultimatum to meet its demands. See documents below: 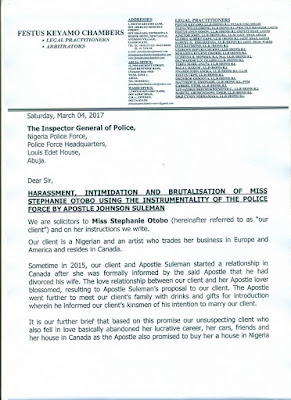 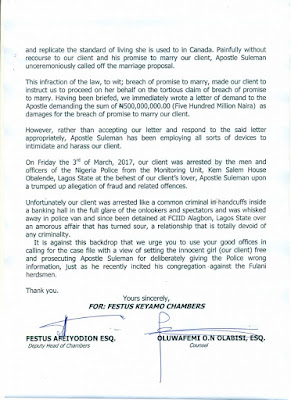 By villagossip.com at March 06, 2017
Email ThisBlogThis!Share to TwitterShare to FacebookShare to Pinterest