While Buhari is away, Osinbajo signs 7 bills into law (LIST)

While, President Buhari away, Acting President, Professor Yemi Osinbajo has assented to seven bills passed by the National Assembly. 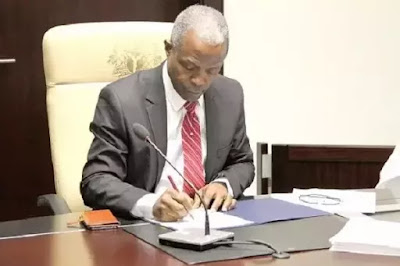 Prof Yemi Osinbajo
Below is the list of bills:


Senator Ita Enang, the Senior Special Assistant to the President on National Assembly matters confirmed that Osinbajo had indeed endorsed the bills.

Also Enang explained that the Acts, other than the Defence Space Administration Act and Institute of Soil science were mainly Amendments to the Principal Act and they are intended to bring the Acts in conformity with current realities.

 
Recall that Osinbajo has been acting for President Muhammadu Buhari since January 19, 2017.

Meanwhile, the National Executive Council (NEC), met on Thursday, February 16 for the first time this year in Abuja and it was presided over by Acting President Yemi Osinbajo.

The NEC approved the nomination of six Nigerians for the Nigerian Sovereign Investment Authority (NSIA).

The NSIA is the manager of Nigeria’s Sovereign Wealth Fund. It was established as independent agency by an Act of the National Assembly in May 2011.

By Solomon Isa at February 18, 2017
Email ThisBlogThis!Share to TwitterShare to FacebookShare to Pinterest