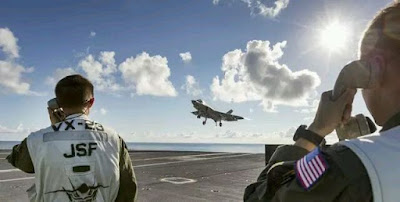 The U.S. was once again the biggest supplier of global arms exports over the last five years, topping Russia at no. 2, while China quickly climbed the ranks to make the top 3.


The Stockholm International Peace Research Institute (SIPRI) released a new study Monday showing that America was the
largest arms exporter from 2012 to 2016, controlling a third of all exports. U.S. exports of major weapons grew 21%, compared to the prior five-year period, widely exceeding the arms trade’s overall growth of 8.4% worldwide.

Overall, weapons were exported in 2016 at the highest rate since the Cold War, based on SIPRI data.

Nearly half of the nation’s arms exports were destined for the Middle East. Weapons made in the U.S. are exported to at least 100 countries, according to SIPRI. That’s far more than any other supplier.

“Both advanced strike aircraft with cruise missiles and other precision-guided munitions and the latest generation air and missile [defense] systems account for a significant share of U.S. arms exports,” Dr. Aude Fleurant, director of the SIPRI Arms and Military Expenditure Programme, said in a statement.

The U.S. is home to Lockheed Martin (LMT), the world’s largest defense contractor by sales. The F-35 builder reported net sales of $47.2 billion in 2016, a 16.5% increase year-over-year. SIPRI’s most recent data estimated that Lockheed Martin sold $36.44 billion worth of weapons in 2015.


U.S.-based Boeing (BA), Northrop Grumman (NOC) and Raytheon (RTN) were also among the top five sellers of weaponry in the world as of 2015. The U.K.’s BAE Systems ranked third worldwide.

SIPRI said Russia was the second-largest state supplier of arms, accounting for a 23% share. An estimated 70% of Russian arms went to India, Vietnam, China and Algeria.

China arms exports grew over the last five years from a 3.8% share to a 6.2% share, as sales jumped 74%. The increase puts China among the top suppliers, as France and Germany held 6% and 5.6% shares of the market, respectively.

Germany’s exports fell sharply, even though arms sales spiked in 2016. France saw a lower rate of exports as well, although new contracts will likely reverse that trend.
By Solomon Isa at February 21, 2017
Email ThisBlogThis!Share to TwitterShare to FacebookShare to Pinterest