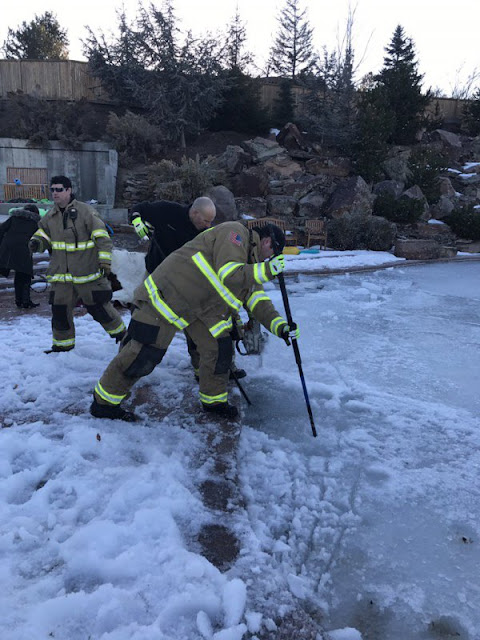 Firefighters in Idaho, USA helped pull a stranded horse out of a frozen pool in a resident’s back yard.

The Eagle Fire Department shared photos as fire crews and
neighbours broke through the ice to pull Lucky, the 5-year-old horse, out of the frozen water.

An Ada County Sheriff’s spokesman said a homeowner called to report the horse was trapped in the pool around 4:50 p.m. Saturday after Lucky and several other horses escaped from their nearby enclosure.

The sheriff’s office said Lucky had been in the water for about an hour before firefighters and deputies arrived to cut through the ice with chainsaws and pulled him free.

“When we starting moving him, he was not having it — he actually fell down under the water,” Shoplock said of efforts to rescue the horse.

Lucky was checked by a veterinarian after being pulled from the icy water and appeared to be okay, according to officials.
By Solomon Isa at February 18, 2017
Email ThisBlogThis!Share to TwitterShare to FacebookShare to Pinterest