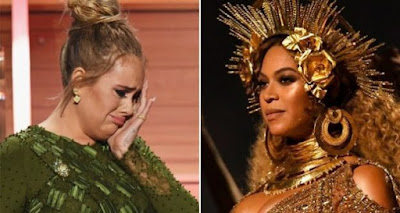  
Even Adele was shocked when she beat Beyonce in the best album category at the Grammys.
“I can’t possibly accept this award,” she said as she (accidentally) broke it in two.
Of course, she did accept it in the end; despite protesting that
Beyonce was the more deserving winner.
But the issue reignited claims the Grammys are racist – consistently overlooking black artists in favour of the white singers they inspire.
In the last 10 years, only one black musician has won the coveted album of the year award: Herbie Hancock, whose 2008 album, River, was a collection of covers of songs by the white folk singer, Joni Mitchell.

 
Things looked better the decade before that, when Outkast, Lauryn Hill and Indian-American artist Norah Jones all took home the trophy.
So does the Grammys have an issue with race? Not according to their president, Neil Portnow.
“I don’t think there’s a race problem at all,” he told Pitchfork, following Sunday’s ceremony.
“Remember, this is a peer-voted award. So when we say the Grammys, it’s not a corporate entity – it’s the 14,000 members of the Academy
“We stand 100% behind the process: It’s a democratic vote by majority. So somebody could either receive or not receive a Grammy based on one vote. It could be that tight.”
Nontheless, critics are unimpressed.
“Well-meaning people often have a hard time understanding what systemic racism looks like,” music scholar John Vilanova wrote last year, after Taylor Swift beat Kendrick Lamar to the best album title.
“This is what systemic racism looks like.”
He says black artists are sidelined into categories that are “coded black”, like best urban contemporary album (which Beyonce won) and best R&B performance (awarded to her younger sister, Solange).
Solange herself spoke out about Beyonce’s loss on Sunday. In a since-deleted tweet, she wrote: “Create your own committees, build your own institutions, give your friends awards, award yourself, and be the gold you wanna hold, my Gs”. 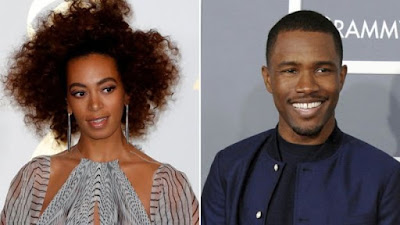  
Meanwhile, music writer Kevin Powell suggested Beyonce’s Lemonade – which tackles racial politics, police shootings and female empowerment – made voters “uncomfortable” because it is “unapologetically black”.
“We are still a nation that does not want to deal so directly with truth,” he told CNN.
“Adele’s album is strong, but it is just songs about love. It is safe and uncontroversial; it breaks no new ground. And neither do Grammy voters, generally speaking, when it comes to picking winners of this particular award.”
At the same time, the Grammys have no duty to reward the cultural impact of Beyonce’s album – undeniable though it was.
And in purely commercial terms, Adele’s 25 was the most successful record on the shortlist – selling 9.2 million copies in the US, compared to Beyonce’s 1.6 million.
What matters more is the perception that black artists’ contributions are undervalued. Frank Ocean, Kanye West and even Justin Bieber gave the Grammys a wide berth this year for that very reason.
If the organisers don’t do something to redress that balance, the event could slide into irrelevance.
But then – has the ceremony ever truly been about the awards? Beyonce’s epic, gravity-defying performance did more to raise the profile of her album than adding another trophy to her collection (she has 22 Grammys so far).
In the wake of Sunday’s ceremony, sales of Lemonade increased fourfold.
Sales of Adele’s album merely doubled.