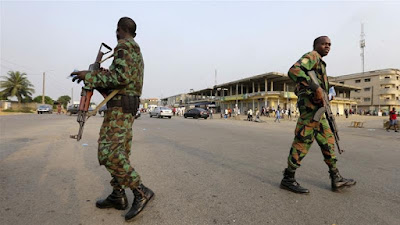 mutiny by security forces, officials say.
 The mutiny of soldiers began on 6 January in the city of Bouake but later spread to the commercial capital Abidja [Legnan Koula/EPA]

Six journalists, including three media owners, have been
arrested in the Ivory Coast for "spreading false information" about a mutiny by security forces, their newspapers and the public prosecutor said.

The move came after elite forces became the latest troops to protest over pay in recent weeks in the West African nation, firing into the air in the army barracks town of Adiake.

"Regarding recent action taken by the military... we have come to believe that certain media organisations are spreading false information in a bid to encourage soldiers to revolt," said a statement from the public prosecutor broadcast on national television on Sunday.

The editor and owner of the independent dailies L'Inter and SoirInfo were arrested and held in a police camp in the capital Abidjan, along with the editors and owners of the opposition newspapers Le Temps and Notre Voie.


The journalists will be questioned to "find out where responsibility lies" for the alleged false information, the prosecutor said.

They were arrested on suspicion of breaking the law which forbids inciting rebellion among the military, attacking state authority and publishing false information relating to defense and state security, the statement added.

The elite forces mutinied in Adiake, some 90km from Abidjan, between Tuesday and Thursday, but later "apologised to the authorities" according to a high-level military source.

 
Troops first launched a mutiny over pay on January 5.

Those protests subsided when the government reached a deal with 8,500 mutineers, agreeing to give them 12 million CFA francs ($19,000) each.

However more soldiers have since taken to the streets demanding similar bonuses.

But the 1.2-billion-euro pot would be insufficient to offer similar payments to all of the country's 23,000-strong security forces.
By Solomon Isa at February 13, 2017
Email ThisBlogThis!Share to TwitterShare to FacebookShare to Pinterest