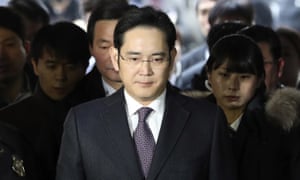 The acting head of Samsung is to be indicted on bribery and embezzlement charges connected to a corruption and cronyism scandal centring on South Korea’s impeached president, Park Geun-hye.
Lee Jae-yong and four other Samsung executives will almost certainly face trial over accusations that South Korea’s biggest conglomerate donated millions of dollars to foundations run by a close friend of Park’s in exchange for government favours.
Later on Tuesday, Lee, who is officially Samsung’s vice-president but has in effect run the
company since his father suffered a heart attack in 2014, will be charged with bribery, embezzlement, hiding assets overseas and committing perjury before parliament, prosecutors said on the final day of their investigation into a scandal that has rocked the country’s political and business worlds.

The four executives, who all face the same charges as Lee except perjury, are the Samsung group’s vice-chairman, Choi Gee-sung, and president, Chang Choong-ki, as well as Samsung Electronics’ president, Park Sang-jin, and executive vice-president, Hwang Sung-soo.
Some of the executives will resign and leave Samsung, but Lee is expected to stay on as de facto head of the company if there is a trial.
The firm, whose group revenues are equivalent to a fifth of South Korea’s GDP, has so far declined to comment on the charges, but this month it said it had “not paid bribes nor made improper requests to the president seeking favours”.
The scandal has ensnared government officials and business figures, and could soon topple Park, the daughter of a former South Korean dictator. She became the country’s first female president in early 2012.
Park was impeached by parliament in December after accusations that she colluded with Choi Soon-sil, a longtime confidante, to pressure major South Korean companies to donate almost $70m to Choi’s foundations.
Choi, who has denied charges of attempted fraud and abuse of power, is accused of using the money for personal gain.
Samsung was the biggest single donor to the foundations, which Choi had set up to support Park’s policy initiatives. It is also accused of separately giving Choi millions of euros to fund her daughter’s equestrian training in Germany.
In return, Lee allegedly sought government approval for the contentious $8bn merger of two Samsung affiliates in 2015 – a move that would smooth his path to the top of the entire Samsung group.
The merger was opposed by many shareholders, but went through after the national pension fund – a major Samsung shareholder – approved it.
The arrest of the 48-year-old billionaire earlier this month deepened the crisis facing Samsung, coming soon after the safety scare involving its smartphone, the Galaxy Note 7. Lee has denied all the accusations.
On Tuesday, the firm said it was dismantling the division that makes key decisions relating to its business strategy. However, Chung Sun-Sup, the head of chaebol.com, a private watchdog forum on conglomerates, said: “It is yet to be seen whether this is another cosmetic measure aimed to divert public criticism.”
Chung added: “[In the past] Samsung has dissolved group-controlling organisations when it got caught in breach of laws, only to revive them afterwards under different names.”
He said the Lee family could be “expected to continue wielding power and influence over the whole group”.
Park risks becoming the first president since South Korea became a democracy in the late 1980s to be forced from office. The country’s constitutional court is expected to rule on the legality of the impeachment vote before the acting chief justice, Lee Jung-mi, retires on 13 March, although theoretically it has until June to consider its decision.
If her impeachment is upheld, Park would immediately lose her immunity to criminal indictment and South Koreans would have to elect a new president within 60 days.
By Solomon Isa at February 28, 2017
Email ThisBlogThis!Share to TwitterShare to FacebookShare to Pinterest