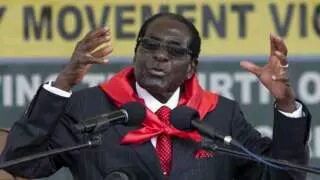 He went on to express his support for Mr Trump's America-first policy, saying "America for Americans" and "Zimbabwe for
Zimbabweans".
It is unusual for the veteran head of state to publicly back any US president.

The US imposed sanctions such as travel bans and an assets freeze on Mr Mugabe and his allies in 2001.
The sanctions were imposed over allegations of human rights abuses and election rigging.


Zimbabwe's government says they caused the country's economic collapse.
Most experts however blame Mr Mugabe's seizure of white-owned farms, which used to be Zimbabwe's economic backbone.


Africa Live: More on this and other stories
Even a dead Mugabe can stand - wife
Mugabe jokes over health rumours
Five views on Trump and Africa
With Mr Trump's reputation for being unconventional, Mr Mugabe is hoping his administration might decide to lift the sanctions.

"Give him time," Zimbabwe's leader said of Mr Trump in an interview aired ahead of his 93rd birthday on Tuesday.
"Mr Trump might even re-look [at] the sanctions on Zimbabwe."

Mr Mugabe has hoped Mr Trump might lift US sanctions
President Trump has caused global uproar over his policies, including his ban on people from seven mainly Muslim countries entering the US, although this has been overturned by the courts, and his pledge to rebuild the US economy on "America-first" principles.


Mr Mugabe is unfazed by such policies as he seems to identify with Mr Trump's brand of nationalism.
"When it comes to Donald Trump... talking of American nationalism, well America for America, America for Americans - on that we agree. Zimbabwe for Zimbabweans," Mr Mugabe said.
As far as the nonagenarian president is concerned, there is more hope with Mr Trump in the White House than if it had been Hilary Clinton.


"I was surprised by his election, but I did not like Madam Clinton to win either," he said.
"I knew she could slap sanctions on us as a legacy."
President Mugabe, Africa's oldest head of state, also repeated that he is not ready to step down from power.
"The majority of the people feel that there is no replacement, successor who to them is acceptable, as acceptable as I am," he told state media.

His Zanu-PF party has endorsed Mr Mugabe as its candidate in elections due next year.
Last week, first lady Grace Mugabe said if the party were to field his corpse, he would still win.
By Solomon Isa at February 20, 2017
Email ThisBlogThis!Share to TwitterShare to FacebookShare to Pinterest