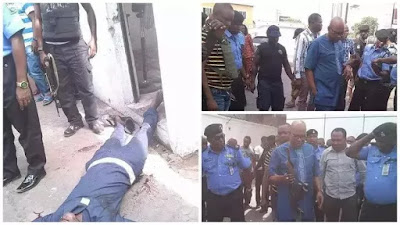 - The police are yet to make any arrest

Premium Times reports that a witness reported that the robbers had trailed a customer who came in to deposit a huge sum of money to the Zenith bank branch located along Wetheral Road, opposite Dan Anyiam Stadium in the city.


 
Out of the five people who lost their lives was one of the robbers, three bank security agents and the customer who was trailed to the bank, seven other people were injured in the crossfire.


The witness said: “The bandits on getting to the bank premises opened fire at the man as he was bringing out his money. As soon as that happened, security men at the bank responded by shooting down one of the robbers.
“On killing of the bandit, his gang members rained bullets on the security men, killing three of them on the spot."

The source said that the robbers later fled with their heist in a Ghana-must-go bag.

The state Police Commissioner, Taiwo Lakanu, after the incident led officers to the scene in a convoy of three Toyota Hilux vans.

The police spokesperson, Andrew Enwere, confirmed the incident. He said a police officer gunned down one of the suspected armed robbers, while another police officer sustained injuries in the exchange of fire with the hoodlums.

He told operatives of the Rapid Response Squad of the Lagos State Police Command how his gang robbed about 35 Automated Teller Machine users in Alaba Rago Market, Ojo area of Lagos, the police said.

Babatunde was arrested after his failure to rob a lady around 5:48 a.m. at an ATM point in Alaba Rago Market

By Solomon Isa at February 23, 2017
Email ThisBlogThis!Share to TwitterShare to FacebookShare to Pinterest