Oscar-nominated actress and musician Queen Latifah will be honored at the American Black Film Festival ceremony with the “Entertainment Icon” award.

According to CBS News, the New Jersey native, who plays one of
the main characters on the FOX TV show Star, will receive her honor during the ABFF ceremony in Los Angeles this Friday (Feb. 17).

“It means so much to me coming from fellow entertainers and my peers,” said the entertainer.

Queen Latifah received an Oscar nomination for her work in the film Chicago. She has been nominated for two Emmy Awards, and won a Golden Globe Award for her work in Life Support. However, we can’t forget how she got her start in the industry; she was a rapper and is lauded as one of the pioneers for females in the game.

Congrats to the Queen! The ABFF ceremony will air on Feb. 22 on BET and Centric at 8 p.m. EST. 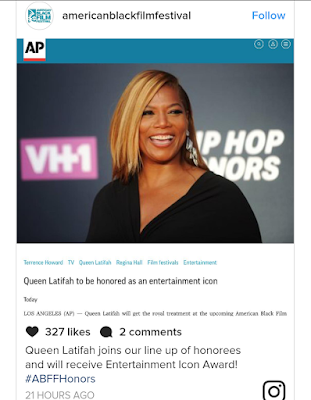 By Solomon Isa at February 16, 2017
Email ThisBlogThis!Share to TwitterShare to FacebookShare to Pinterest