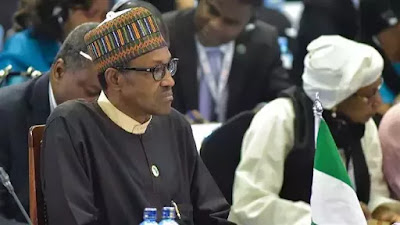 - Author and political columnist, Okey Ndibe has written on the medical vacation of President Muhammadu Buhari

Author and political columnist, Okey Ndibe has written on the medical vacation of President Muhammadu Buhari.

 
The health of President Buhari has been generating reactions from Nigerians
Ndibe is of the opinion that the president should consider handing in his resignation letter because of his ill-health, adding that Nigerians will pay the president to quit at this stage.

‘’I’m aware that some Nigerians still consider Mr. Buhari essential, if not indispensable, to our country’s prospect of rebirth.

''To these, a suggestion that the man ought to quit office must sound heretical—indeed seem like a prescription with a dollop of ghastly mischief. But such people are grandly deluded,’’ he wrote.

 
Ndibe stated that concrete ideas, not the cult of any particular personality, are best for a polity in need of ethical rejuvenation.

‘’And two years of Mr. Buhari’s tenure as president are adequate to demonstrate his paucity of ideas,’’ he opined.


The author suggests that the president’s reputation and goodwill are enough, saying what Nigeria needs is robust and organic ideas.

He also queried the president’s war on corruption, lamenting that the Buhari’s administration has failed to achieve the conviction of one significant political figure from the recent past.

He wrote: ‘’If Mr. Buhari’s government has not been able to prosecute Mr. Dasuki to date, is there much hope of his administration making a noticeable dent in the war against corruption via prosecutorial means? I don’t think so.’’

 
Ndibe noted that Buhari’s much-vaunted crusade against graft has neither dampened nor discouraged the appetite for corruption in Nigeria.

He pointed out that the Nigerian security and para-military agencies are still fleecing Nigerians of their money by demanding for bribes.

He also noted that judicial processes operate at snail-speed; lawyers and judges collude in using incessant adjournments to derail justice.

He also accused the president of not taking any steps when political appointees close to him have been accused of corrupt acts.

‘’If the Buhari brand ever represented antipathy to corruption, that image is now profoundly tarnished. At its core, corruption in Nigeria remains as vibrant and resilient as ever.

''If there’s a scaling back in levels of embezzlement, it owes less to the Buhari effect than to the significant decline in oil revenues,’’ Ndibe wrote.

He further stated that President Buhari’s resignation is unassailable, adding that any seriously sick president deserves the time and space to focus on his health.

He wrote: ‘’He can hardly do so while shouldering the burden of running a complex and beleaguered country. Besides, Nigeria is beset by grave crises that appear to worsen by the day.

 
‘’Nigerians deserve a leader at the height of mental and physical fitness, a president endowed with the agility and energy to wrestle with his country’s deep-rooted problems.

‘’The trouble is not just that Mr. Buhari is enfeebled by age and illness. The greater issue is that he presides over a country that is manifestly sicker than he.

‘’The idea that an ailing man can effectively mind the business of a more seriously sick country is, quite simply, absurd.‘’

Meanwhile, a group known as the Coalition of Urhobo Nation Youth Leaders and Stakeholders (CUNYLS) has demanded that the presidency release a video recording of President Buhari to assure Nigerians that all is well with the president.

The group further suggested that former President Olusegun Obasanjo and former Vice President Alex Ekwueme should lead a delegation of statesmen to visit the president.

President Buhari has been in London since January 19. The presidency had first announced that he was there for a 10-day leave. But he has since extended the leave on medical grounds.
By Solomon Isa at February 19, 2017
Email ThisBlogThis!Share to TwitterShare to FacebookShare to Pinterest