While the majority of the fashion industry has remained silent on President Trump's latest executive order, sneaker giant Nike has publicly condemned the immigration ban. In a letter written
by the brand's president and CEO Mark Parker, the chairman called upon the core values of the brand as ammo and reassurance against the act.

"Nike believes in a world where everyone celebrates the power of diversity. Regardless of whether or how you worship, where you come from or who you love, everyone's individual experience is what makes us stronger as a whole," Parker began. The letter includes a shoutout to Nike-sponsored athlete and Olympian sprinter Mo Farah, who arrived from Somalia to Britain when he was eight years old. Farah now resides in Oregon with his wife and children where he, in a letter posted to his Facebook the day before, fears he may not be able to return to once he comes back from training camp in Ethiopa. Farah joined the Oregon Project training group as a coach in 2011.
  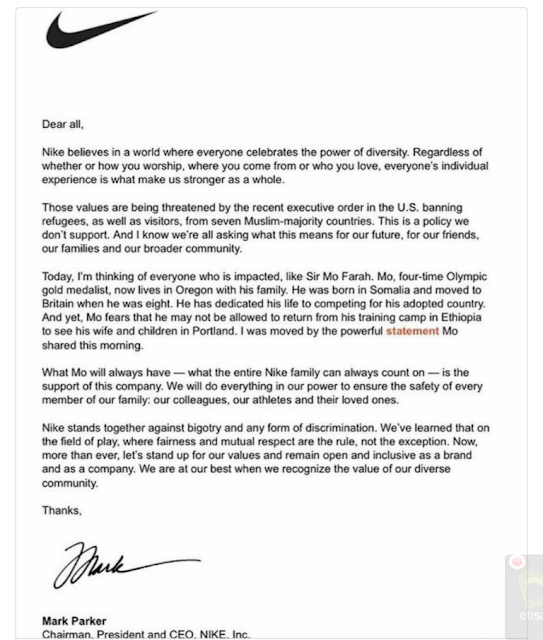 Nike continues to give millions of dollars to various charities and youth programs each year, including a commitment to donating 1.5% of pre-taxed income to making a positive impact on local communities. In 2005, the American company became a UN investing partner toward the education and acceleration of young girls, and continue to financially support Girl Effect, which helps the proper development of female youth across 80 countries.

In addition to Nike, several tech and Silicon Valley companies have chosen to speak out against President Trump's immigration ban, vowing to protect their employees. This includes Starbucks, whose CEO Howard Schultz has committed to make the hiring of 10,000 Syrian refugees a priority, and Microsoft's CEO Satya Nadella, who is a refugee himself. "As an immigrant and as a CEO, I’ve both experienced and seen the positive impact that immigration has on our company, for the country, and for the world. We will continue to advocate on this important topic," Nadella wrote in a letter on LinkedIn.

In a request for comment sent out to several LVMH brands by Business of Fashion, many of the industry's top American labels — like Tommy Hilfiger, Ralph Lauren, and Tory Burch — either didn't reply or politely declined to comment. The only to respond were Steven Kolb of the CFDA and Diane von Furstenberg. We'll keep you updated on which brand adds their voice to the conversation next, but we're happy to see as influential and global as a label like Nike come forward and stand up for what's right.