‘I May Run For Presidency Some Day’ – Tinubu 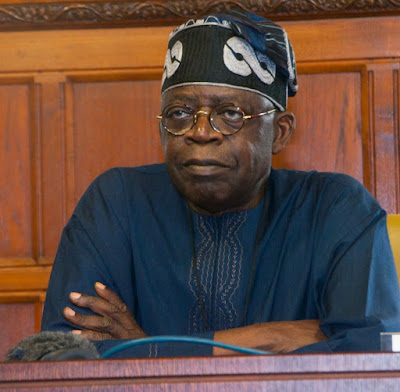 Former Lagos State Governor and National Leader of the ruling All Progressives Congres, Cheif Asiwaju Bola Ahmed Tinubu has revealed he might have up running for the presidency if the opportunity presents itself.

The Jagaban Borgu said this while fielding questions from
journalists on Friday.

He noted that running for any office in Nigeria was an opportunity to serve his country.

He said, “You see there is nothing wrong with such ambition.

“It depends on the timing and the environment and what political leadership dictates.

“I will not brush aside such an aspiration.

”It has been historical even that Buhari tried first, second, third, and fourth before he got it. Resilience, determination, and clarity of purpose.

“Maybe as a senator, maybe as a president, you cannot rule it out. How can I rule such a thing out, the opportunity to serve my country? But you only do that when there is a vacancy.”

Tinubu added that there was no rift whatsoever amongst APC leaders.

He said, “Everything has always been alright in APC camp. I credit the Nigerian creativity in journalism, they create stories, and if you have to respond to every one of it, you will be in trouble.”
By Solomon Isa at February 27, 2017
Email ThisBlogThis!Share to TwitterShare to FacebookShare to Pinterest