I may go into politics – Yvonne Nelson tells BBC 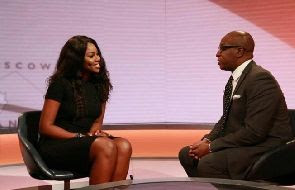 
Celebrated Ghanaian actress Yvonne Nelson has hinted a possibility of her going into politics in the near future.

The award-winning actress and producer revealed on Focus On
Africa on BBC last Wednesday that she is giving ‘politics’ a thought.

“Maybe! You never know. Maybe in the future. I am still thinking about it,” she said on the international platform when she was asked whether she will be going into politics.

The beautiful actress in May 2015 mobilised her friends and Ghanaians to stage a mammoth ‘Dumsor Must Stop’ vigil to pressurise the then Mahama-led government to solve the country’s energy crisis.

Many had thought that her campaign was the beginning of the downfall of the Mahama’s government.

However, Yvonne told the BBC that “I don’t think so….but it (dumsor) was something that had to be addressed.”

Also, to many some Ghanaians, the dumsor campaign was a roadmap for the actress to skew her way into Ghanaian politics. But, Yvonne had always maintained politics is a “no go area for her” until now that she is saying she is giving politics a thought.

 
The popular actress is one of Ghana’s most influential personalities with enviable media following and records.

Wednesday’s appearance on the BBC was not her first time on the international media. Last Thursday, she shared photos of herself from the studios of BBC in faraway London on her social media platforms.

“BBC hashtag slaying with brains,” she captioned the photos.

She talked about different other issues on BBC, including Africa’s film industry, music and marriage.

According to her, she might be marrying soon. “I will marry soon. May be this year, you never know,” she said.

Yvonne lost her dad, Mr Nelson, and she wrote a touching tribute about her relationship with the dad, wishing him to “sleep well.”

Also, she is expected to release the season two of herself produced ‘Heels & Sneakers’ series this year. The beautiful actress remains one of Ghana’s most relevant and leading entertainment personalities.
By Solomon Isa at February 14, 2017
Email ThisBlogThis!Share to TwitterShare to FacebookShare to Pinterest