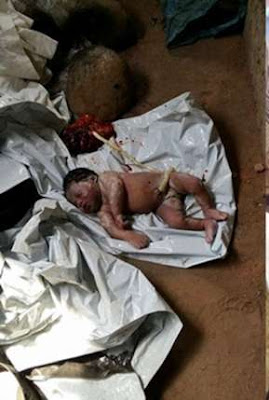 VIEWER DISCRETION
A mother identified as Foluke Owolewa has revealed that she killed her day-old baby because her husband could not cater for
her other children. She killed her baby shortly after she gave birth in Ipamesan, Ogun State.

The incident was report­ed to the Sango Divisional Police headquarters by the vice chairman of the Com­munity Development Asso­ciation in the area, leading to her arrest.
Quoting the 40-year-old mother, a statement by the state PPRO, Abimbola Oy­eyemi, said, “Immediately the case was reported, the DPO, Sango Ota Division, SP Akin­sola Ogunwale, led detectives to the scene, at Unity Estate, Sango Ota, where the woman was promptly arrested.

“On interrogation, the suspect claimed that her two other children are not being taken care of by her husband, so the new baby will be an ad­ditional burden on her.
“It was also revealed that this is not the first time the woman would attempt killing her child; she once threw one of her daughters into pit latrine on delivery, but the baby was rescued.”