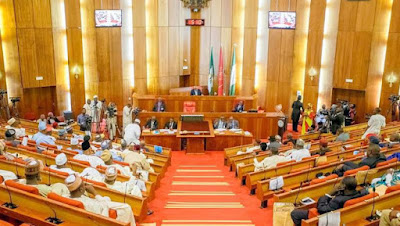 The Nigeria Police Force and the Nigeria Security and Civil Defence Corps have been given an order by the Senate to evacuate street beggars, sex workers and the destitute from the
streets of the Federal Capital Territory.

According to the upper chamber of the National Assembly, an agreement has been reached with commercial banks operating in the Federal Capital Territory on the cleaning and maintenance of roads in the Abuja metropolis.

Part of the deal is for the banks to fix streetlights and beautify the streets in fulfilment of their corporate social responsibility.

The Chairman, Senate Committee on FCT, Senator Dino Melaye, said this when briefing journalists in Abuja on Thursday.

He was in company with the members of the committee.

Get reviews of the best phones, electronics and home appliances in Nigeria

Melaye said the committee, last week, summoned the Commissioner of Police, FCT Command; and the Commandant of the NSCDC, FCT Command, because the Senate was “appalled by the security situation in Abuja.”

He said, “We are also very uncomfortable with the number of hoodlums on our streets in Abuja. We have beggars, the destitute and commercial sex workers spread across every nook and cranny of the city. We have issued an order to the Commissioner of Police and the Commandment of the NSCDC, and we have also instructed the FCT to provide logistics for the immediate evacuation of all beggars, including those little boys, who claimed they are helping you to clean your car’s windshield. By so doing, they are adding additional dents to your car.”

Melaye stated that if corporate organisations were in charge of the maintenance of public facilities, it would be better done because the name of the companies and their brands would be at stake.

“And we are also going to save a lot for government, which can now be used for other developmental purposes,” he said.

Melaye added, “Last week, the Committee on FCT summoned the managing directors of all the banks operating in the federal capital city and 15 banks attended. The essence of that meeting was to correct the problems associated with environmental sanitation of the federal capital city.”
By Solomon Isa at February 24, 2017
Email ThisBlogThis!Share to TwitterShare to FacebookShare to Pinterest