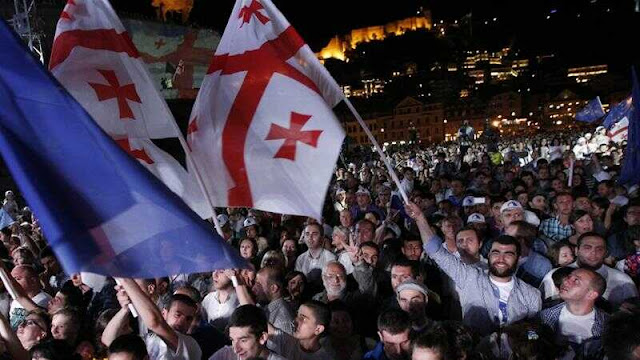 The European Parliament has approved a proposal on visa liberalisation for Georgia, allowing conditional visa-free travel for citizens of the small post-Soviet country.

The policy, which has a snap-back mechanism in case of mass
violation of terms, was approved on Thursday with 553 votes in favour, 66 against and 28 abstentions.

The short-term travel visa waiver - expected to come into force in late March following formal approval by the European Council - applies to the Schengen area, which includes 26 countries.

He also said the government was convinced that Georgians would show "exceptional responsibility in accepting this milestone result and achievement, and will scrupulously observe the laws of host countries".

 
Georgia, with only 3.7 million citizens, will lose visa exemption for nine months if its citizens suddenly start making many more asylum requests; stay in the bloc for longer than 90 days at a time; or cause a "substantial increase in the risk to public policy or internal security".

If problems persists, the bloc would be able to extend the suspension for another 18 months in a more complex procedure that would also give the European Parliament a say.


Georgia sees visa-free travel to the EU as part of a geopolitical tussle with Russia over the ex-Soviet state's Western aspirations, which Moscow opposes.

The republic was at the heart of international tensions in 2008 when a five-day war between Tbilisi and Moscow in August led to the previous sharp decline in ties between Russia and the West.

The prospect of easier travel to Europe has been used by the pro-Western government in Tbilisi to win popular backing for painful EU-sponsored reforms.

The EU-Georgia talks on visa liberalisation started in June 2012.