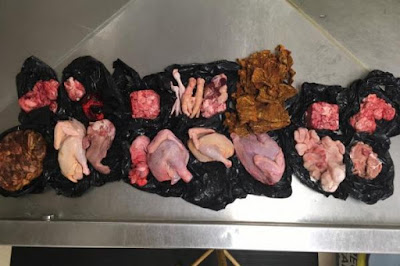 U.S. Customs and Border Protection said agriculture specialists at Dallas Fort Worth International Airport searched the woman’s luggage when she arrived from Vietnam Feb. 4 and discovered she was transporting 22 pounds of animal parts — including meat, brains, hearts, tongues, and heads from pigs, chickens, and cows.

 
“Customs and Border Protection agriculture specialists work diligently to prevent the introduction of diseases into the U.S.,” Dallas CBP Port Director Cleatus Hunt Jr. said. “These kinds of meat products are potential carriers for harmful diseases that could result in devastating effects on our agriculture industry.”

The seized animal parts were destroyed in a process called “steam sterilization.”

It was unclear whether the woman, a permanent resident of the United States, will face any charges.
By Solomon Isa at February 18, 2017
Email ThisBlogThis!Share to TwitterShare to FacebookShare to Pinterest