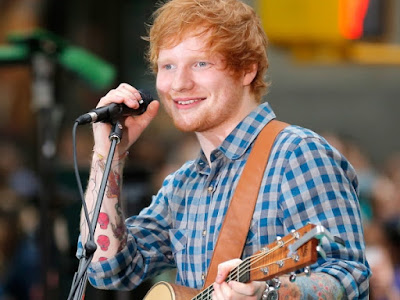 Ed Sheeran gave up his own shoes on Wednesday night so his girlfriend didn’t have to walk barefoot after her designer heels broke at a BRIT Awards afterparty.

The pop star performed his hit song Shape of You with British rapper Stormzy at the London prizegiving, and headed to the
Warner Music bash with girlfriend Cherry Seaborn to celebrate after the ceremony.

However, disaster struck for Cherry during their celebrations as the heel of her $1,750 (R22 593) Christian Louboutin boot snapped, prompting chivalrous Ed to take off his own grey sneakers to give to his lady love.

The couple was later pictured leaving the event, with Ed stepping out in just his black socks, guiding a smiling Cherry out of the venue with one hand, and holding her broken heels in the other.

The star has been dating Cherry since 2015 and they celebrated their one-year anniversary last summer at a party hosted by Ed’s close pal, Taylor Swift, who captured the couple kissing in the background of a photo she posted on social media.

The relationship appears to be going from strength to strength, with Ed and Cherry recently moving in together.

“She lives three or four miles away from me, where I grew up, and we live together now,” Ed told Australian radio hosts Kyle and Jackie O earlier this month, adding, “We just got cats!”

He also confessed he “feels pretty good about” the idea of spending the rest of his life with his girlfriend, and Ed is keen to start a family after becoming broody while on his 2016 break.