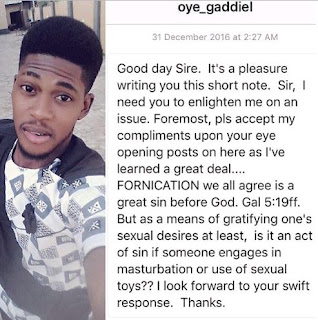 The OAP took his time to reply the lad, first crediting him for his well composed note to him. He wrote:

“This is one of the most difficult questions anyone
has ever asked me. From the way the letter is constructed, you can see that the young man is not only intelligent and well educated, but he is also polite which indicates that his parents brought him up well. From his tone, I can see this is a genuine question that is bothering not only him, but a multitude of other people, young and old, irrespective of their religious inclination.
The religious righteousness in me wanted to tell him that masturbation is a sin and must never be engaged in, but where does that leave the 46 year old widow, who confided in me last year, that she had to buy a sex toy because her husband died, leaving her with 6 children and no man wanted to marry her, and instead of jumping from one man to the other, she decided to please herself?
Or an unmarried man at 35, when I know it’s unhealthy, according to empirical research, not to empty your prostate regularly, as it predisposes men to prostate cancer later in life?
—
Marc Garnick, M.D., Editor in Chief of Harvard Medical School’s Annual Report on Prostate Diseases, says:
“Two relatively large studies of this question, reported in 2003 and 2004, yielded good news for sexually active men: high ejaculation frequency seemed to protect against prostate cancer.”

Ejaculations included sexual intercourse, nocturnal emissions/masturbation. According to the study available at www.harvardprostateknowledge.org The scientists found that men who ejaculated 21 or more times a month enjoyed a 33% lower risk of prostate cancer compared with men who reported four to seven ejaculations a month.”
—
Now, before that righteous Yahoo Boy, who you intend to give your January salary to, jumps up and starts calling masturbation a sin, let’s remember that Isaac married Rebecca when she was only 3 years old, according to research done by scholars, and the average marriage age for boys in biblical times, was around 13. Furthermore, David had several wives and concubines, Solomon had 1000, Abraham 2 wives several concubines, Jacob 2 wives and their housegirls, so emptying the prostate wasn’t such a problem back then. And since in the times of Moses, Jacob, David and Solomon there was no DSTV and electricity, most people tended to entertain themselves in the other room.

However with the peculiarities obtainable in today’s society, a 13 year old boy is still in secondary school and won’t be eligible for marriage for another 12 years at least. I know people who are in their forties and single and I am sorry but I can’t preach abstinence to them… And even if I try to, would they listen?

If you feel guilty about madturbation, which is normal, pray about it. God understands those feeling, because he put them in you in the first place.

Also remember, your body is the temple of Christ, so you must protect it! You won’t want to open it up for different sexual spirits or for prostate cancer.
By Solomon Isa at January 06, 2017
Email ThisBlogThis!Share to TwitterShare to FacebookShare to Pinterest