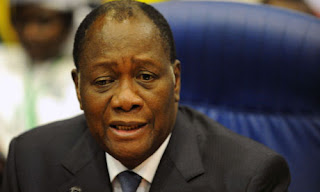 The President of Ivory Coast, Alassane Ouattara has named a
new cabinet of 28 ministers as well as Amadou Gon Coulibaly as prime minister.

The cabinet shakeup comes just days after a mutiny by former rebels who blocked roads across the country and sparked political tensions. Following the crush of the mutiny, former Prime minister, Daniel Kablan Duncan tendered his resignation on Monday.

“I have tendered my resignation and that of the government, he said at the Presidential palace, after a meeting with President Alassane Ouattara,”
By Solomon Isa at January 12, 2017
Email ThisBlogThis!Share to TwitterShare to FacebookShare to Pinterest