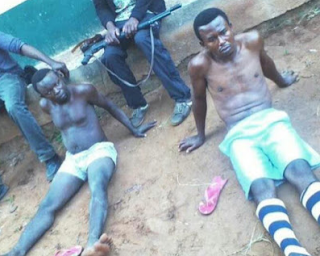 Two men, one claiming to be a pastor and the other an Apostle,
were caught engaging in sexual activities yesterday evening in Ngwo community of Enugu North Local Government of Enugu State.

An eyewitness, while speaking to news publication, Newest Rivers, said:

“Around 1.00am in the morning two men were caught having sexual intercourse. One of them is a pastor and the other is known as an apostle.

“The so called pastor who was discovered to be the man in the gay relationship had been reported earlier to the vigilante group of Ngwo neighborhood by a boy of twelve who claimed he was raped by the pastor and had Fluid poured into his mouth after the abuse. 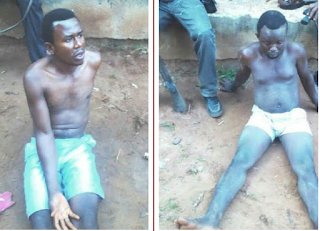 “The vigilante group did not prosecute the pastor after the report because there was no concrete evidence. They resolved to monitor the pastor from that day unknown to him.

“It was on this day, 17th June 2016 that he was caught in the act of gay sex and all said about him by the young boy he molested was believed. The pastor denied the report of the twelve year old boy. ” I only masturbated him and kissed him” he said.

He further disclosed he is of Imo state origin”

By Solomon Isa at January 05, 2017
Email ThisBlogThis!Share to TwitterShare to FacebookShare to Pinterest