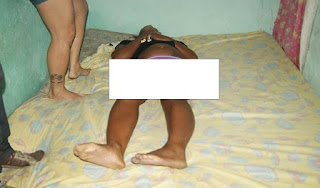 A 35-year-old prostitute was found dead in the early hours of
Tuesday in a brothel in Kubwa, Abuja.
The deceased, simply identified as Ome Enyi, a native of Cross River State, lived at the brothel for more than a year.

City News learnt that a man, yet to be identified, lodged in the brothel the previous night and was suspected to have slept in the same room with the deceased.

A source alleged that the man checked out of the brothel on that fateful day before the corpse of the prostitute was discovered lying naked on the floor inside the room.
“The corpse was discovered by one of the cleaners who had gone to tidy up the room that morning,” the source said.

The source added that the corpse was later moved from the brothel to the Kubwa General Hospital by the police, following a report to them by the brothel manager.
The remains of the prostitute have been deposited at the hospital morgue after being certified dead by a doctor.
When contacted, the Kubwa Divisional Police Officer (DPO), Chief Superintendent Nuruddeen Sabo, confirmed the incident.
By Solomon Isa at January 05, 2017
Email ThisBlogThis!Share to TwitterShare to FacebookShare to Pinterest