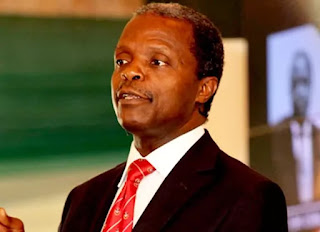 Vice President Yemi Osinbajo has urged Nigerians to ignore rumours that the administration of President Muhammadu Buhari was moving to Islamise Nigeria.

According to him, Nigeria can’t be Islamised, as he added that it is impossible.

Osinbajo made this known after receiving the Lifetime Achievement Award of the Student Christian Movement of Nigeria (SCM) in his office on Thursday, January 5, Vanguard reports.

He noted that it was impossible to Islamise the country given the 1999 Constitution that forbids state religion.

 
Expressing appreciation to SCM for the honour, the vice president solicited the organisation’s assistance in disseminating factual information about the federal government’s policies and programmes.

The vice president also urged religious bodies to channel their energies towards proffering solutions to the numerous challenges facing the country.

He challenged Nigerian youths to take advantage of abundant opportunities in ICT, agriculture and other sectors, while encouraging the youths on the importance of using the internet to acquire knowledge as well as learning a second language to boost their global competitiveness.


This will be the second time Osinbajo will be addressing the rumoured plan of the Buhari-led government to islamise Nigeria.

 
Recall that before the election in 2015, Prof. Osinbajo spoke out that the All Progressives Congress (APC) was not secretly plotting to Islamise Nigeria if it won the election.

The vice president last year disclosed that Buhari’s cook of 25 years and his driver are Christians, adding that while he was a Military Head of State, almost 70% of his cabinet were Christians and he never made attempts to Islamise them.
By Solomon Isa at January 06, 2017
Email ThisBlogThis!Share to TwitterShare to FacebookShare to Pinterest