Man and his 2-year-old daughter bathing together, is this inappropriate or not? 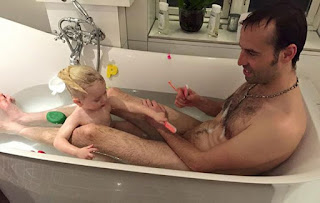 Whether it was to save time or water, or just seemed like a cute
bonding moment, the odds are high that you took a bath with one of your parents at some point in your childhood.

So Danish comedian Torben Chris says he didn’t think anything of it when he posted this photo on Facebook of himself bathing with his 2-year-old daughter:

He probably should have realized that some people would lose their shit. (It’s social media, after all.)

In a Facebook post that’s since been deleted, Torben wrote (per the U.K.’s The Sun newspaper) that he published the photo in an attempt to erase the stigma around fathers bathing with their kids.

“Someone told me that he had been accused of pedophilia by a stranger because he bathed with his two-year-old daughter,” he said. “Another had been warned on his ‘urge’ towards pedophilia, because he had shared a picture of a French braid on his 11-year-old daughter’s bare back on social media. There was even a father whose wife thinks it was inappropriate, if your daughter sees her father urinate.”

He went on to argue that there’s no reason why children and adults can’t be naked together. “There is nothing wrong with a father who washes his daughter’s bottom when she’s a child,” he says. “On the contrary, it is bloody disgusting if nobody does it, and unfair if only the mother does it.”

“Nudity with your child is not gross, but natural,” he concluded. “Afather in the shower with his daughter is not pedophilia, it’s fun.”


By Solomon Isa at January 17, 2017
Email ThisBlogThis!Share to TwitterShare to FacebookShare to Pinterest