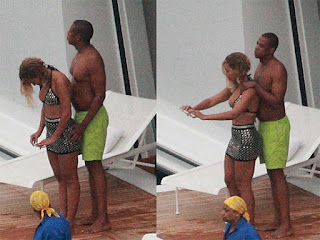 The power couple – Jay Z and Beyonce are currently vacationing
in Italy and she shared the above photo.

Analysts who saw the picture have claimed that rapper and businessman, Jay Z is bored with his marriage judging from the picture.

“Jay Z’s body language is unmistakable in the paparazzi photos that have been taken of the couple. His slumped shoulders and the disinterest on his face are unmistakable: Jay Z is bored in his marriage to Beyonce.

The problem is the lack of Dopamine required to infuse some spice into their marriage. In the early days of a relationships, our brains ooze Dopamine which increases the passionate intensity that we feel for our partner.

But those intense feelings don’t last. And once the Dopamine is gone that’s usually when the problems begin.”

I don’t know what this people are saying oooh, because all me I see is a very rich couple chilling on a million dollar yacht!!
By Solomon Isa at January 10, 2017
Email ThisBlogThis!Share to TwitterShare to FacebookShare to Pinterest