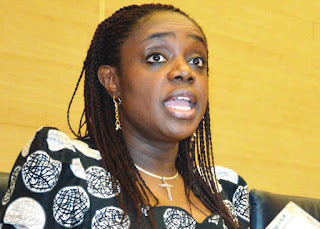 The Federal Government has approved a reduction in the import
duties of 115 items in different sectors of the economy, as part of dovish fiscal policy measures.
According to the Minister of Finance, Mrs Kemi Adeosun, the move is in line with the provisions of the ECOWAS Common External Tariff agreement.

A breakdown of the import adjustment list of 173 items shows that the government approved the reduction of 26 items from 10 to five per cent.
Similarly, the import duties of 89 items were reviewed downwards to five per cent from a national list of 91 products.
However, the government has reinforced the ban placed on the importation of some items including refined vegetable oil, cocoa butter, fruit juice in retail packs, among others.
By Solomon Isa at January 05, 2017
Email ThisBlogThis!Share to TwitterShare to FacebookShare to Pinterest