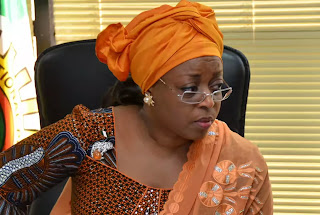 A federal high court in Lagos has ordered that banks holding the
sum of $153,310,000 that belonged to former Minister of Petroleum Resources, Mrs. Diezani Alison-Madueze should hand over the money to the Federal Government.

The Punch reports that Justice Muslim Hassam on Friday, January 6, ordered that the funds allegedly stolen by Diezani from the Nigerian National Petroleum Corporation (NNPC) be forfeited to the Federal government.

 
A court has ordered that Diezani's $153.3m stolen funds be handed to FG
The order was in favour of an exparte motion presented to the court by the Economic and Financial Crimes Commission on Friday seeking the temporary forfeiture of the funds.


According to the presiding judge, the forfeiture is temporary but could become permanent if in 14 days representatives of the three banks do not appear before the court to prove the legitimacies of the funds in their keep.

The Punch reports that in the exparte application, an EFCC investigator Moses Awolusi claimed that it was discovered that sometime in December 2014, Diezani invited an ex-Managing Director of a bank Nnamdi Okonkwo to her office where they hatched the plan of how a cash sum of $153,310,000 would be moved from NNPC to be saved for Diezani

Awolusi said Diezani instructed Okonkwo to make sure that the money was “neither credited into any known account nor captured in any transaction platforms” of the bank.

Nigeria’s ex-finance minister Ngozi Okonjo-Iweala has denied reports that she has been commenting on the Nigerian economy.

 
In a statement signed by Paul Nwabukwu, her media aide, Okonjo-Iweala said she has never commented on the Nigerian economy and will only do when she is ready.

The statement read: “The comments on the performance of the Nigerian economy being circulated by unknown persons and attributed to Dr Ngozi Okonjo-Iweala were not made by her. Like the previous fake audio by an imposter pretending to be her, this is another desperate action by mischievous persons.

“The former minister doesn't need anyone to speak for her because, as everyone knows, she is very capable of speaking for herself. We urge the media and Nigerian public to ignore these petty gimmicks.”
By Solomon Isa at January 06, 2017
Email ThisBlogThis!Share to TwitterShare to FacebookShare to Pinterest