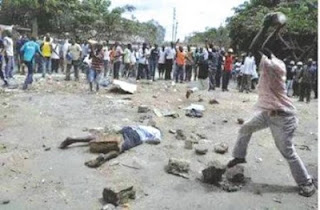 A sixty-year-old man, Philip Ugwu has been confirmed dead after
he was stoned by worshipers of a church in Afikpo LGA in Ebonyi state.

Abani Ugwu, the wife of the deceased reported the matter to the police and Tochukwu Okoh, an evangelist, had been arrested in connection with the incident.

The victim, who is popularly called Boxer or Coach, had argued with the church worshipers in a new generation church over the attention of a fence to demarcate their lands.

One thing led to another and it wasn’t long before Mr. Okoh and three others attacked her husband with stones, Abani said.

“We heard Boxer’s wife screaming that her husband had been attacked by some worshipers and before we could get to the scene, he was lying unconscious,” a witness said.

“He was immediately rushed to the hospital but his wife identified one of the attackers still with a stone who was immediately apprehended and handed over to the police.

“The victim’s wife explained that he had purchased and built on the parcel of land even before the church came to lay claim over it,” a witness who preferred anonymity said.

The witness said that the matter had previously been reported to the traditional council during which the head pastor of the church, still at large, was invited.