The bomb blast that rocked the University of Maiduguri
yesterday morning has left so many people bewildered. Scores of lives have been lost and it is pathetic to know that students are no longer safe with the issue at hand. 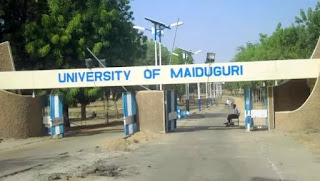 The explosions happened during the early hours of monday, 16th January. Once again, the terrorist plagued city has been thrown into a session of wailing following the incident. As a follow up on the ugly incident, there are some things you need to know about the twin bomb explosions that rocked the university.

Find some of these things below:

1. There is no entry for now

Following the horrifying incident, the university has been made inaccessible to students. Many of them are not allowed to enter the premises. The popular school gate 5 was blown up in the explosion.


2. This is the first explosion in the university

Despite the activities of the insurgents in the state, the school management has tried its best possible in ensuring the safety of the students.

The citadel of learning has been trusted to be a secured place ever since the dreaded Boko Haram terrorists started their operations in the state. Today's explosion is the first of its kind in the university.

3. The first blast occurred at a mosque

Although everything seems hazy at the moment, it was reported that the first blast happened at a mosque within the staff quarters. It was said to have happened at the time the Muslims were finishing up with their morning prayers.

 
About the same time, another explosion was reported to have rocked the university's 5th gate. Pedestrians often make use of this gate.

4. The dreaded Boko Haram sect is being suspected

It should be known that no group has been declared responsible for this, it is believed that the Boko Haram sect must have carried out this heinous plot. The Nigerian police and soldiers have flooded the scene and are trying to carry out their duties.

5. Lives have been lost

With the twin bomb explosions that rocked the university yesterday morning, many lives have been lost. According to the report gotten, the professor of veterinary medicine has been killed in the bomb blast.

Also, there are speculations that Professor Mani and other senior staff are either dead or badly injured in the attack.


6. Rescue operations are at the sites

This is indeed a horrible incident that will forever be in the history of the school. Many lives will never remain the same again. NEMA officials are at the scene trying to render help to those affected and clear the site.
By Solomon Isa at January 17, 2017
Email ThisBlogThis!Share to TwitterShare to FacebookShare to Pinterest