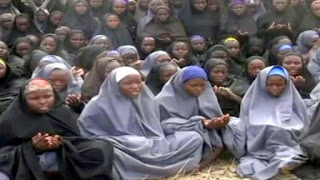 Over 200 girls were kidnapped by the Boko Haram on April 14, 2014 as the insurgents went on rampage, killing thousands and
claiming territory in Adamawa, Borno, and Yobe states.
Negotiations between the federal government and the Boko Haram led to the release of 21 of the kidnapped girls while another three were freed by soldiers. Dozens of others had escaped on their own.

Despite losing most of the territory they controlled including the dreaded Sambisa forest to Nigerian troops, the insurgents have kept hold of the 195 girls.
In his message on Sunday to commemorate the 1000th day of the kidnap, President Muhammadu Buhari recommitted the Federal Government to securing the release of the girls.

“We are grateful to God that on this landmark day, we are not completely in the depths of despair, but buoyed with hope that our daughters will yet rejoin their families and loved ones. Three of them have been recovered by our diligent military, while the freedom of 21 others was secured through engagement with their captors. We are hopeful that many more will still return as soon as practicable,” Mr. Buhari said.
He reiterated his pledge, pronounced many times in the past, that government would not spare any effort to reunite the girls with their families.

“I salute the fortitude of the distraught parents. As a parent also, I identify with their plight. Days turned to weeks, weeks turned to months, months turned to years, and today, it is 1,000 days. The tears never dry, the ache is in our hearts. But hope remains constant, eternal, and we believe our pains will be assuaged. Our hopes will not be shattered, and our hearts will leap for joy, as more and more of our daughters return. It is a goal we remain steadfastly committed to,” the president said.
 

“Someday soon, we will all rejoice together. Our intelligence and security forces are unrelenting, and whatever it takes, we remain resolute. Chibok community, Nigeria, and, indeed, the world, will yet rise in brotherhood, to welcome our remaining girls back home. We trust God for that eventuality.”
Earlier on Friday, the Bring Back Our Girls group, BBOG, described comments attributed to the Senior Special Adviser on Media and Publicity to Mr. Buhari, Femi Adesina, concerning the return of a rescued Chibok girl on Thursday, as unacceptable.

In a statement signed its spokesperson, Sesuh Akume, the group said the statement by Mr. Adesina that the remaining 195 girls will return ‘one day’ is sad and a reason why they will embark on the rally, as planned.
Mr. Adesina was quoted by the group as saying, ‘The President notes that the recovery raises renewed hope that the other captured girls will one day be reunited with their families, friends and community.’
“Note that he said ‘…will ONE DAY be reunited with their families…’ Not ‘as soon as it’s humanly possible.’ There is no tone of urgency. This confirms our doubts as to the federal government’s rescue mission,” the BBOG said.
“Is the strategy that each one would escape of their own accord and be recovered for how long the process takes? This is excruciatingly pitiful,” the group said.

The group called on Nigerians to join its protests which commence January 8 to put pressure on the government to free the girls.
“We therefore go ahead with our #Day1000 activities with recommitted zeal. Activities have been confirmed to hold in New York (4 events on the same day 8 January), Washington DC, Paris, Lagos, and Abuja. Kindly join any close to you or organise one in your location”.

To commemorate the 1,000th day of the abduction, Amnesty International has also urged the Nigerian government to ensure the release of every person kidnapped by the Boko Haram.
“One thousand days after the chilling abduction of 276 school girls in Chibok, the Nigerian government must redouble its efforts to ensure the release of the girls, and all other victims of mass abduction,” it said.
“This terrible anniversary is a chilling reminder not just of the tragic disappearance of the Chibok school girls, but also all other individuals – many of whom are also children – who remain captive in Boko Haram’s hideouts across the country. These abductions and other attacks on civilians, many of which constitute war crimes, must stop,” said Makmid Kamara, Acting Country Director for Amnesty International Nigeria.

“While the Nigerian government is making considerable efforts to recover the 195 Chibok girls still in Boko Haram’s custody, we are concerned that victims of less well publicised mass abductions have not benefited from comparable efforts to secure their release.”
“The Nigerian government should also dramatically step up its efforts to ensure the safe release of abductees and provide proper psychological and medical support to those who have already been rescued, released or have escaped captivity,” Mr. Kamara added.
According to the statement, Amnesty International said it had documented at least 41 other cases of mass abductions by Boko Haram since 2014 and called for the prosecution of suspects in relation to the crimes.
 

The group also commended the commitment of the BBOG group towards ensuring the safe return of the girls.
“Many of the attacks committed by the group, including deliberate killing of civilians, rape, destruction of homes, bombing of places of worship, markets and other civilian structures, constitute war crimes Amnesty International recognises the resilience and determination of the Bring Back Our Girls (BBOG) campaigners in Nigeria in getting the plight of the Chibok girls on the world’s agenda and for keeping up the pressure on the government by continuing to demand the release of all the girls. Their persistence is notable at a time when the civic space for peaceful protests and gatherings in Nigeria is rapidly shrinking.

“The people of Nigeria, and indeed the world, are remembering the 1000th day after the Chibok abduction primarily because of the relentless work of Bring Back Our Girls. We hope that the energy of this formidable campaign will be replicated in demands for justice and accountability for crimes committed by all parties to the current conflict in north eastern Nigeria,” Mr. Kamara said.
By Solomon Isa at January 08, 2017
Email ThisBlogThis!Share to TwitterShare to FacebookShare to Pinterest