WATCH OUT FOR 14TH NOVEMBER'S SUPERMOON, THE BIGGESTAND BRIGHTESTIN OVER 60 YEARS 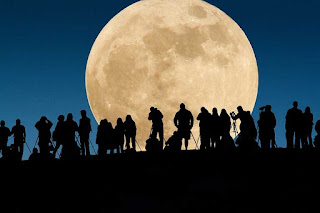 Monday, 14th November, the earth will experience a supermoon, which will be the biggest and brightest it has been in almost 69 years.

A supermoon, also known as “perigee full moon” – is a
phenomenon that occurs when a full moon coincides with the moon being the closest it gets to the Earth on its orbit resulting in a moon that appears larger and brighter than normal.

The difference between this unusually big supermoon and other supermoons is negligible. Supermoons are roughly 30% larger in area and 30% brighter than the smallest full moons – full moons that happen when the moon is at its furthest distance from Earth: at “apogee”. In terms of diameter – the width of the moon – it willWhile a supermoon is 30% brighter than the smallest full moons, it’s only about 15% brighter than an average full moon, and will provide more moonlight than you’d usually get from a full moon. Sometimes it takes a real expert to notice the difference. 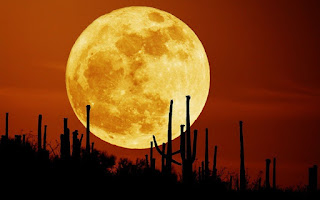 The reason all supermoons are not the same size is that the shape of the ellipse that the moon draws around the Earth is changing all the time as it is pushed and pulled by other gravitational forces.

As a result, the ellipse changes how stretched-out it is. When the supermoon coincides with a very stretched out ellipse, a supermoon is even closer (and bigger).
The last time the moon was so close — actually, 29 miles closer — was in January 1948. In 2034, there will be another supermoon which will come even closer, within 221,485 miles.

NASA has encouraged everyone to get outside on Monday and gaze at it, soak in the view and take some photos. be about 14% wider than the smallest full moons.
By Solomon Isa at November 14, 2016
Email ThisBlogThis!Share to TwitterShare to FacebookShare to Pinterest