Dig into the data and you'll find a cauldron of economic insecurity that helps explain why many Americans voted for him. 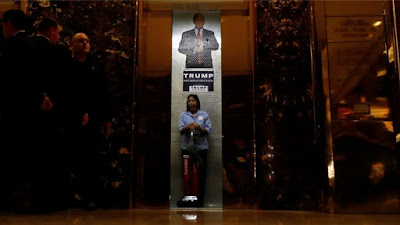 Patricia Sabga is an economics and global affairs journalist based in New York.

It may be tempting to reduce President-elect Donald Trump's victory solely to a triumph of bigotry, especially when the headline numbers on the United States economy seemed to work in Hillary Clinton's favour. Under President Barack Obama, the US witnessed the longest streak of job creation on record. Unemployment is below 5 percent and Americans are finally getting a raise.

But dig into the data and you'll find a cauldron of economic insecurity that helps explain why voters sided with the self-styled, anti-establishment candidate.

Nearly six million Americans are working part-time who'd rather be working full-time. Non-college educated men of prime working age are dropping out of the labour force in alarming numbers.

A Federal Reserve survey found that 46 percent of Americans
would struggle to cover an emergency $400 expense. Average incomes adjusted for inflation are less than what they were in 2007 and 1999 - despite the biggest jump on record last year.

Then, there are the trends the data doesn't capture, such as wage theft, from which poorly paid, low-skilled workers are far more likely to suffer.

The data is also partially blinded to the effect of "permatemps" on the economy. Permatemps are hired through temporary staffing agencies to work side-by-side with permanent, full-time employees, but often without benefits and for less pay. We know there are battalions of permatemps and that many of them languish in this employment purgatory for years.

But, the effect resonates far beyond individuals. Scholars believe permatemps drive down wages for permanent employees by making them aware of how interchangeable they are, thus reducing their bargaining power (PDF).

We have no clear picture of how many permatemps work in any specific industry because the US Department of Labor categorises them as employees of temp agencies and not the firms where they actually put in a day's work.


These trends were the soil in which Trump sowed his promises to deport undocumented workers and tear up the trade deals he blamed for harming American manufacturing. However, these policies could backfire by creating more economic pain.

Some estimate Trump's campaign promise to deport undocumented workers en masse would cost the economy hundreds of billions in lost output (he now says he'll deport as many as 3 million undocumented immigrants who've committed crimes, then "make a determination" on the rest). And renegotiating trade deals could spark trade wars that financially disrupt millions of workers whose livelihoods hinge on the strength of US exports.

Trump isn't promising to reboot collective bargaining but his anti-establishment rhetoric struck a chord with voters who long for job and financial security.


Still, the promise to revive manufacturing is a powerful one. For many, it conjures images of the golden era of the US's middle class, when factories provided blue-collar workers with steady jobs that paid well above average.

But even if Trump manages to make good on that promise, there's no guarantee it will wind back the clock for the middle-class Americans. Today, the average, non-supervisory factory worker makes about $5 less than the median for all workers.

Globalisation has certainly been a factor in driving down wages, but there are other forces, such as automation and the erosion of collective bargaining power thanks to the collapse of unions.

I recently travelled to South Carolina, a state that saw its textile factories decimated by globalisation and automation, and has now reinvented itself as an automotive and aerospace manufacturing hub.


A big draw for major players such as Volvo, which is building its first factory in the Americas in South Carolina, is the state's "Ready SC" programme to turn out skilled workers through one of 16 technical colleges.

But, South Carolina also has extremely low labour costs, thanks in part to the lowest union membership in the country. The differences in pay can be considerable.

 
According to the International Union of Machinists and Aerospace Workers, a Boeing assembler mechanic in the company's unionised plant in Washington state is guaranteed to make around $39 an hour after six years of employment, while a comparable worker in Boeing's non-unionised South Carolina plant will make about $23.

Trump isn't promising to reboot collective bargaining, but his anti-establishment rhetoric struck a chord with voters who long for job and financial security.

Americans who live with the sword of economic ruin dangling over their heads; Americans who have not recovered fully from the Great Recession, these are Americans who voted for the political outsider because the status quo has become unbearable.
By Solomon Isa at November 16, 2016
Email ThisBlogThis!Share to TwitterShare to FacebookShare to Pinterest